The FIFA 22 adidas 99 NumbersUp event is a brand new promo that features themed NumberUp player items which are gradually boosted until they reach 99 in one of the stats.

The adidas 99 event is being released for the first ever in FIFA 22.
Release dates for FIFA 22 are official.
All release times are indicated in the UK time zone.
FIFA 22
FIFA 22

FIFA 22 Rulebreakers player items are available in packs in the following dates: 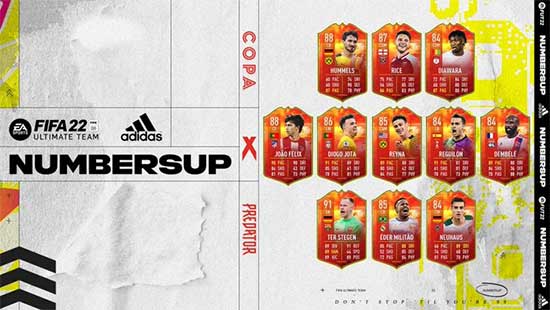 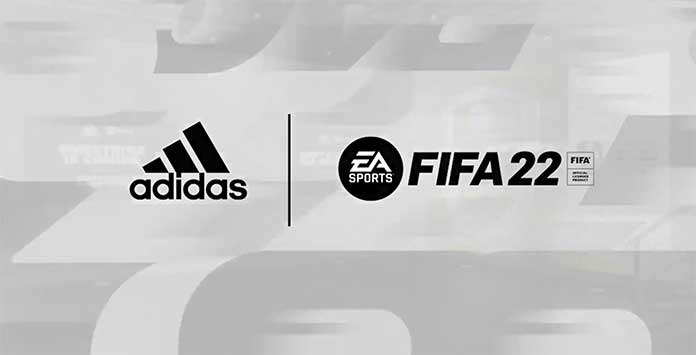 FIFA 22 adidas 99 NumbersUp FAQ section.
1
2
3
4
5
6
7
8
9
10
11
1
Q: What are adidas 99 items?
A: adidas 99 items are special cards introduced for the first time ever in FIFA 22, in which one of the six face stats of selected players are boosted of up to 99.
2
Q: Will these items receive a permanent upgrade?
A: Not exactly. The selected stat will not immediately increase to 99, but will gradually increase.
3
Q: When upgrades will take place?
A: There will be two additional NUMBERSUP upgrades over the course of the football season. After the initial upgrade at the launch of the campaign on November 12, the second upgrade will take place at the end of December, and the third and final upgrade will come later in late April 2022.
4
Q: How high are the upgrades?
A: NUMBERSUP Player upgrades will occur periodically throughout the football season. adidas players will reach 99 in the specific attribute to which their boot corresponds (Dribbling/Handling, Passing, or Pace) by the end of the season, but their other attributes will also be boosted to a smaller degree. In both upgrades all stats receive a +1 boost, except for the main attribute (dribbling, pace or passing) which receives +5 in the first upgrade and turns 99 in the second.
5
Q: How can I get one of these cards?
A: You can get an adidas 99 item in the same way you can get any other card: on packs or on the transfer market. If you want to try your luck on packs, you can go to the store and buy them with coins or FIFA Points. They can be found in any pack with players cards, including free packs. Obviously, the chances of finding one of these cards are higher if you open a pack which contains more player cards. Completing specific SBCs and objectives may also reward you with a adidas item.
6
Q: When were adidas items released for the first time ever?
A: adidas 99 items are a brand new card category in FIFA 22 Ultimate Team.
7
Q: Which offers can I find during the adidas 99 event?
A: Dynamic items, squad building challenges, objectives and promo packs available on the FUT store.
8
Q: Which boot corresponds to which attribute upgrade?
A: NUMBERSUP boosts correspond with the style of adidas boot each selected player wears on the pitch in real life. Over the course of the season, players in the NUMBERSUP squad who wear a adidas Predator boot will see their Dribbling (or Handling for Goalkeepers) upgrade to 99, those in the squad who wear a adidas Copa boot will see their passing increase to 99, and those who wear a adidas X boot will reach 99 Pace.
9
Q: Will players still get upgrades if they are injured or don’t play?
A: Yes. NUMBERSUP players’ upgrades aren’t linked to real-world performances so they will still receive upgrades periodically during the season as they reach the 99 in the attribute that corresponds to their boot.
10
Q: Do the players’ OVR ratings increase to 99 as well?
A: No. Although NUMBERSUP players’ OVR will progressively increase and improve, only the specific attribute that corresponds to their boot will reach 99 by the end of the season.
11
Q: What happens if an adidas NUMBERSUP player is no longer an adidas partner player?
A: If a player changes from using adidas boots to another brand it will not affect their item or progression and they will still be eligible for all NUMBERSUP upgrades.