Every single Wednesday, Electronic Arts releases a Team of the Week featuring the most in-form players. However, the way they are selected is unknown to most of the community. Find out on this page how TOTW players are chosen on FIFA Ultimate Team.

Since FUT 10, every single week EA Sports selects twenty-three players of any category that have played well the previous week in real life and join them in a single team. That team is called Team of the Week and you can play against them in the ‘TOTW Challenge’. These cards are released as In Form for that week only and have boosted stats. In the week a player gets his TOTW card in packs, it is impossible to find his regular card there. The TOTW players from the starting eleven also have their card art altered with default images being replaced by special dynamic ones.

Except in special cases, the TOTWs are released non-stop for a year, from September. All matches from the domestic leagues licensed in the game are likely to result in a TOTW card. On the dates scheduled by FIFA to international qualifiers matches, domestic leagues stop and TOTW can be formed by players from these matches (friendlies are not taken into account). Most of the matches take place over the weekend, but no games are excluded just because they take place on a different day (yes, Monday or mid-week games can also receive these IFs). Players that stand out on a Tuesday, or later days, are candidates for following week’s TOTW. When there are not many matches to be played, as in July, the batch of selected players can be shortened to eighteen instead of the usual twenty-three.

These black cards have become more important on FUT 17, when FUT Champions and Ones to Watch cards were introduced. The rewards of the most competitive FUT game mode are based on untradeable items that replicate the TOTW of each week. In addition, Ones to Watch investors are constantly alert to new TOTW to see if their cards will appreciate or not.

What many people do not know is the way how TOTW players of FIFA Ultimate Team are chosen. That is why we have decided to release this guide that clarifies how this is done. 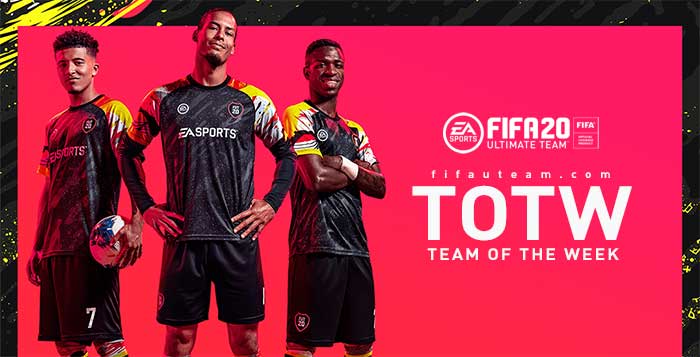 Team of the Week items are announced every Wednesday at 3pm (UCT time) and released in packs three hours later. However, they begin to come to life much earlier. Although EA does not reveal anything about TOTW’s backstage, the truth is that a few years ago a game developer uncovered in an interview that his team met every Monday morning to make a first plan of what would be the team of the week. For this, and according to the producer Niels Diekmann, they have the precious help of the weekly reports produced by an EA’s department based in Cologne (Germany): the FIFA Data Collection and Licensing Group. As soon as the list of 23 players is closed, it goes through several other departments until they reach the official social networks where they are announced: licenses, brand, QA testing, design, strategic partners and marketing.

06 PREVIOUS TOTW CARDS
When assigning a new TOTW card, EA always checks the amount of IF cards a player eventually already has and when has he received the latest card. If he has been awarded many times with these cards, it is likely that priority will be given to other players. Also if he has already received it two weeks before, most likely he will have to wait for another time. And yes, it already happened a player entering in two consecutive TOTWs but almost sure it won’t happen again.

09 OPPONENT’S DIFFICULTY
To be decisive in a win over Manchester City or over Fulham is not exactly the same, isn’t it? This is also reflected in EA’s choices. The greater is the achievement, the more chances a player has to receive an IF card.

18 OTHER RESTRICTIONS
More than a game, FIFA Ultimate Team is a business. And like all big business, everything has to be planned in detail. The common player does not have the slightest idea of the many situations that have to be planned day to day to the point where they can condition the players selected to the TOTW. Hence, there are choices that we will never understand because they were forced to happen in the interests of the game’s producer and its strategic partners.