MORE ICONS
REAL LIFE
BIOGRAPHY
Retired right-back Javier Zanetti (born 10 August 1973) is the leading Argentine cap holder. Despite having comparably short spells with Talleres and Banfield, it is Internazionale where Zanetti cemented his place as one of the game’s all time greats.

He holds the record for number of appearances for an outfield player with 1123 matches, and famously captained Inter to five consecutive Serie A titles. One of the games most respected professionals, Zanetti retired from football in 2014
PERSONAL INFORMATION
Birth Date
10 August 1973 Javier Zanetti’s early career saw him play for Talleres and Banfield in Argentina, before he moved to Europe in 1995, joining Internazionale. In Milan he established himself as a regular at both right-back and left-back, earning the nickname El Tractor for his consistency and exceptional fitness levels.

Just three years after signing for the club, he helped Inter to the UEFA Cup trophy, scoring his club’s second in the 3-0 victory against Lazio in the 1998 Final. In 2010, Javier Zanetti led Internazionale to the most successful season in their history. Domestically, Inter won their 5th Serie A title in a row, before also lifting the Coppa Italia. The 2010 Champions League Final was the pinnacle of Zanetti’s career, as the Argentinian made his 700th career appearance, before lifting the trophy to complete an unprecedented treble.

After a record 19 seasons, his iconic status at Inter was confirmed by the club retiring the Number 4 shirt in his honour. Javier Zanetti won 16 trophies at Internazionale, 15 of which came after he was appointed club captain in late 2001. One of his most impressive achievements was leading the club to a famous double in 2005-06, winning both the Serie A title and the Coppa Italia.

Now at the mid-point in his career, Zanetti’s excellent stamina and technical ability allowed him to adapt to playing as a midfielder, a position he would excel in for the remainder of his career. 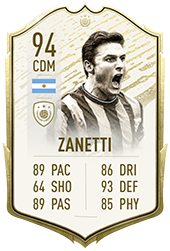