MORE ICONS
REAL LIFE
BIOGRAPHY
Michael Owen (born 14 December 1979 in Cheshire) is a retired English striker who burst onto the scene with Liverpool in the late 1990s. In 2001, Owen’s goals helped win a famous treble for Liverpool and he ended that year with the honour of being named European Footballer of the Year. Spells at Real Madrid, Newcastle United, Manchester United and Stoke City followed and saw Owen end his club career with 222 goals in 482 matches.

Coveted due to his supreme finishing ability, Michael Owen joined Real Madrid in 2004 as the latest member of the Galácticos. He would finish his sole season in Spain as Real Madrid’s second top league goal scorer, with La Liga’s best goal-to-minute ratio.

Owen earned a place in Madrid folklore when he latched on to fellow countryman David Beckham’s long ball to score in El Clásico and secure a 4-2 victory for Los Blancos. Michael Owen burst onto the scene as a fresh-faced teenager, heading into England’s 1998 FIFA World Cup™ campaign off the back of a golden boot winning first full season for Liverpool. After impressing from the bench, the pacey young striker cemented a place in the starting 11 in time to score a memorable goal against Argentina in the second round with a stunning individual strike.

A fantastic run through the defence ended with a world class finish to announce Owen on the world stage. Despite his glittering reputation and scoring feats for Liverpool, Michael Owen had yet to pick up any trophies with the Merseyside club. This changed in 2001 when the baby-faced assassin helped Liverpool to a historic cup treble.

The FA Cup final was the highlight of his campaign, scoring twice against Arsenal in the last 10 minutes to turn a 1-0 deficit on its head. The League Cup and UEFA Cup also went the way of the Reds, and Owen became only the fourth Englishman to win the Ballon d’Or. 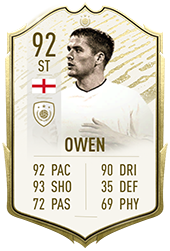