MORE ICONS
REAL LIFE
BIOGRAPHY
Peter Schmeichel (born November 18 1963) is a retired Danish goalkeeper, and was voted the world’s best goalkeeper in 1992. He is best remembered for his successful time at Manchester United, where he helped lead the club to an unprecedented treble of league, league cup and European glory in 1999.

He is a record setting goalkeeper and boasts a fine resume of awards and accolades, including the record for greatest clean sheets-to-game ratio in the English Premier League.
PERSONAL INFORMATION
Full name
Peter Bolesław Schmeichel Peter Schmeichel began his career in Denmark, and it was at Brøndby where he first rose to prominence. His time there yielded several trophies, including the Danish 1st Division title during his debut season at the club.

He went on to win the 1st Division title again in 1988 and 1990, before winning the inaugural Danish Superliga in 1991. The late 80s also saw Schmeichel make his international debut, and he was part of the Danish Euro 1988 squad. In the early 1990s, Danish goalkeeper Peter Schmeichel had left Brøndby to join Manchester United. He featured for Denmark during their famous European Championship win in 1992 and quickly built a reputation as the best goalkeeper in the world. By the end of the 1990s, Peter Schmeichel had cemented his place in football as a goalkeeping legend. Going into what would be his final season at Manchester United, he had won four Premier League titles already, but the best was still to come.

In the 1998-99 season, Schmeichel and his teammates went down in history as they completed a famous treble, winning the Premier League, FA Cup and the Champions League, where he captained them to victory in the most dramatic of circumstances. 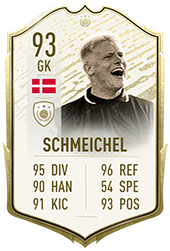