MORE ICONS
REAL LIFE
BIOGRAPHY
Rui Costa (born 29 March 1972 in Lisbon) was a Portuguese International who began his career at Benfica after joining their youth system at the age of five. After transferring to Fiorentina in 1994, he quickly went on to cement his place as one of the best attacking midfielders in the world.

His impressive performances continued, and prompted AC Milan to break their transfer record by paying a reported £30 million for his services. Costa was capped 94 times by his country and ended his career back at Benfica, establishing himself as one of the greatest number 10s ever produced by Portugal.
PERSONAL INFORMATION
Full name
Rui Manuel César Costa After rising through the Benfica academy, Rui Costa really began to make a name for himself in the early 1990s. Internationally, Costa scored the winning penalty for Portugal in the 1991 FIFA U-20 World Cup, but it was in Portugal where he really excelled.

He spent three consecutive years from 1991-1994 with Benfica (he would later return in 2006) and helped them to cup success in the 1992-93 season, which was followed by a league title win the following year. In 2001, Rui Costa was bought by Milan for a club record fee of just under €44m and his time at Milan helped them to several trophies. Costa started the Champions League final in 2003, which Milan won, and the following season helped them to the Serie A title.

Further titles included the UEFA Super Cup and two domestic cups in Italy. On the international front, Costa scored twice as Portugal made it to the Euro 2004 final, where they were runners up to Greece. Whilst at Fiorentina between 1994 and 2001, Rui Costa earned a reputation as one of the best attacking midfielders in the world. Helped by Costa and his fantastic technical ability, Fiorentina enjoyed three trophy successes in his time at the club. 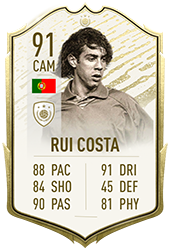