FIFA 21 Stadium Items are essentially used to personalize your club, making your playing experience the most unique as it possibly can be.

FIFA 21 Stadium Items are one of the four cards types (the others are players, staff and consumables). They replace the old category Club Items. These items can be tradeable or untradeable and be available in the packs, on the transfer market and as rewards. You can keep as many FIFA 21 stadium items as you want in your club, as long as there are no duplicates. You can have them duplicated on the transfer list or targets, though. The FUT Stadium is a customisable stadium arena. When you create your club, you will receive your basic setup FUT Stadium as your default stadium. You will be able to change your stadium to any other available stadiums in FIFA 21 and customise its theme and design using FUT Stadium feature. To edit and customise your FUT Stadium, you just need to move up your gamepad’s left-stick (L) in any main FUT screen. Once you are in FUT Stadium section, you will be able to customise the following categories: match day, crowds, sidelines and structure. To upgrade and unlock some of the items, you will need to complete specific objectives. Note that not all stadiums support all customization features. Be sure to check the icons on the top of each stadium item.

BADGES
Every club must have an active badge. It is the one that will be shown on the starting animation of every match, every pause and all menus of this game mode. 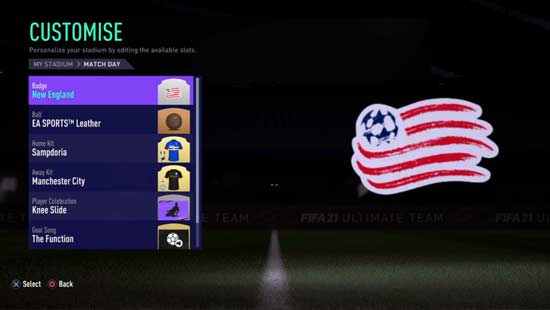 ANALYZE
In a general way, and like it happens with the kits, the badges do not have any role on your club’s success. They purely have an aesthetic function.

You can choose to use the badge of your club preference in real life expecting an extra incentive but it will wear off after a couple of matches.

If you are not one of these gamers who love to collect all the club items in the game, you will only need one badge. The active one. It makes no sense to own other badges since you may only have one active badge at a time.

You probably don’t even need to buy a badge because the starter pack already gives you one. Unless you want to exchange it for another of your choice and if so, you can sell the old badge after activating the new one.

If you go for that path, you must choose one of about 500 badges included in the game. If you like any specific badge go to the transfer market and filter by the respective club. Remember that you can also use custom badges that you can win via Season Objectives.

BALLS
Every club must have an active ball. In order to avoid issues for other players, it will only be seen on your own screen. 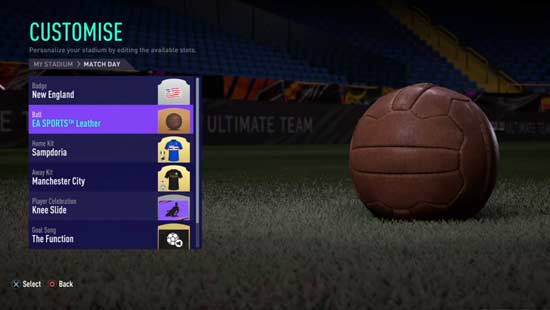 ANALYZE
If you are not one of the gamers who love to collect all the stadium items in the game, you will only need one ball. The one that will be active. It makes no sense to own other balls since you only may have one active at a time. It could be useful to change the ball according to weather conditions and, in this case, you would need a second ball, but before starting a game you never know if you will play in the sun, rain or snow. Only purists may think that they need to change the ball based on the team they choose to play a specific game, but it is very rare to find someone like that.

You probably don’t even need to buy a ball because the starter pack already gives you one. Unless you want to exchange it for another of your choice and if so, you can sell the old ball after activating the new one.

If you go for that path, you must choose one of the around 60 balls included in the game, including a few custom balls available exclusively via Season Objectives. Unfortunately, there is no filter to helps you to find a specific ball according to its colour and weight.

The balls of FIFA 21 Ultimate Team are like the ones in real life: they have different colours and weights, and they behave differently from each other.

The orange balls and especially the pink ones are the best to play in any weather condition, as they are visible both in the rain and in the snow. On the opposite side, the white balls are not recommended to play in the snow.

The classical balls are weightier and better for long shots, long throws and to good control. The other ones are too light for good shots from outside the area and, although fast and suitable for crawling shots, control one of these balls is more difficult.

KITS
Every club must have one active home kit and one active away kit. You can choose which you want to use before every match or on the Stadium Hub. 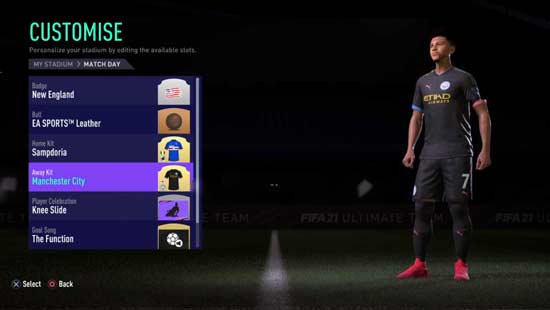 ANALYZE
Generally speaking, the kits do not have any role in your club. You can choose the kits of your club preference in real life expecting an extra incentive but it will not work after a few matches. The best thing you should do about it is to buy a home kit and away kit with different colours to avoid trouble distinguishing your players from the opponents’ players. Kits with unpopular colours could be a good strategy to confuse opponents but it will not give you a great advantage.

It isn’t easy to choose a kit for your club. There are more than 1,500 kits. They are different in colour, pattern and sponsor. If you like any specific kit go to the transfer market and filter by the respective club. Every club has two kits. Some of the most popular ones have a third kit too.

The most popular clubs are also the ones which kits are most wanted. It is the case of Real Madrid, Barcelona, Paris Saint Germain, Bayern Munchen, Liverpool, Chelsea and Manchester United. However, there are a few kits even more expensive.

PLAYER CELEBRATIONS
You can set up a goal celebration to be performed as default when your team scores. You can still perform other celebrations. 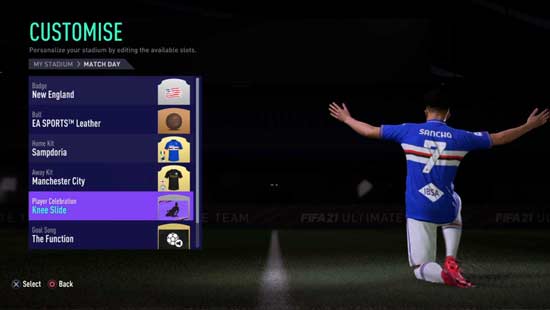 GOAL SONG
You can set up a specific goal song to be performed every time you score a goal on your stadium. 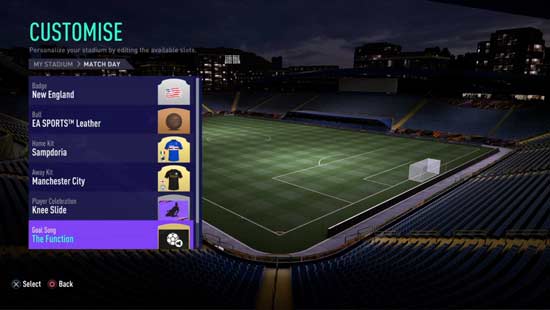 CLUB NICKNAME
You can set up a nickname used by commentators when you are playing with your team. 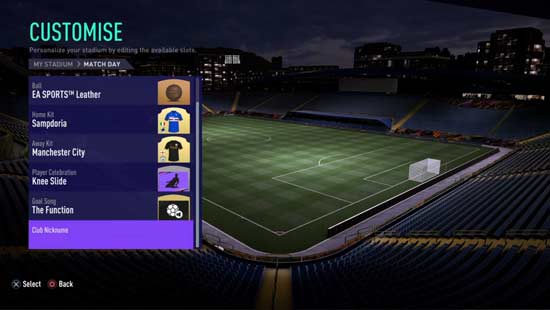 STADIUM THEME
You can set up a stadium theme that will feature on the sidelines and in the crowd throughout the match. 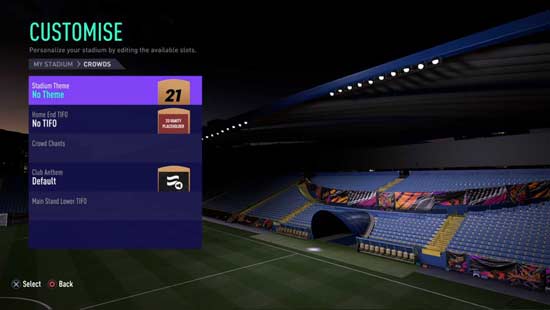 TIFOS
You can set up a tifo and a background tifo that will feature in the pre-match intros. After goals, there will be some replays which feature your Tifos. 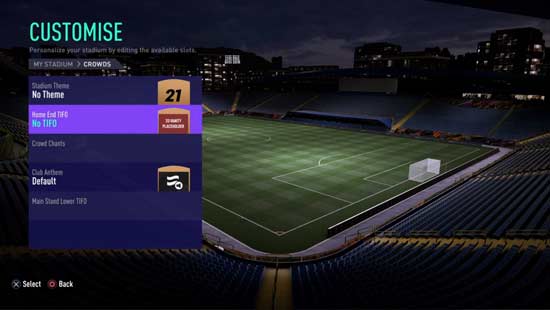 CROWD CHANTS
You can set up a crow chant to be played during macthes on your stadium.

CLUB ANTHEMS
You can set up a club anthem to be played on your stadium. 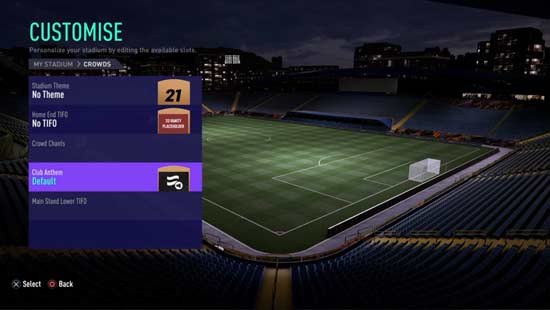 STADIUM BASE PAINT
You can customize your stadium choosing the main colour of the structure. 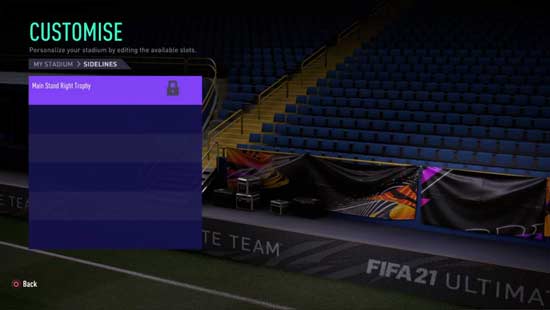 STADIUM SEAT PAINT
You can customize your stadium choosing the main colour of the seats.

FLAME CANNONS
You can set up flame cannons to feature on specific moments, like goal celebrations.

CONFETTI CANNONS
You can set up confetti cannons to feature on specific moments, like goal celebrations.

SPARKLERS
You can set up sparklers to feature on specific moments, like goal celebrations.

FIREWORKS
You can set up a specific pyrotechnic to feature on home matches. 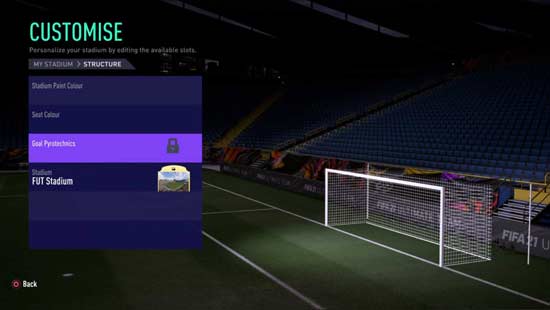 STADIUMS
If you don’t want to customize the house of your squad, you can select a licensed stadium. 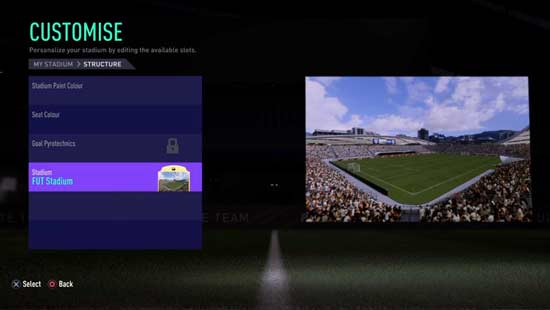 ANALYZE
The active stadium is the one where you will play your home matches when you are the host of matches, which happens when you have the best connection. That means three advantages: you get an advance of some milliseconds over your opponent, play with your ball and you play on your stadium. Check if you did everything possible to improve your connection: test your ping, open the router ports and play with NAT 1. The better your connection is and the closer you are from your opponent, the highest is your chance of playing without lagging.

The stadium items affect not only the visibility but also the game play. If you are not one of the gamers who loved to collect all the game items, you will only need one stadium. The one that will be active. It makes no sense to own another stadium since you only may have one active stadium at a time. Even if for some reason you wanted to change the stadium, like to adjust weather conditions to the players you have chosen to a specific match, you never know in advance if you will be the host or not.

You probably don’t even need to buy a stadium because the starter pack already brings one. However, we recommend to do it. Change it to another of your choice and sell the old stadium after activating the new one.

If you go for that path, you must choose one of the licensed stadiums included in the game or customize the FUT Stadium. If you like any specific stadium go to the transfer market and filter by the respective category.

You should choose a stadium and get used to it. If it is different from your opponent’s stadium and if you are the host, you will have an advantage over him. The more familiar you are with the stadium and the less usual it is, the greater your advantage will be.

Each stadium has an associated an odd of having sun, rain or snow. It is very difficult to dominate the ball in good conditions, with rain and even harder with snow. If you want to avoid playing on this weather, you should choose one of the stadiums where it never happens. Besides these gameplay limitations, weather conditions also influence the visibility, especially with specific balls.

The visibility on a FUT match depends on the camera settings that you have chosen on the main FIFA menu. You can select an existing camera or you can create a custom camera adjusting its height and zoom. However, each stadium also has some weight on how you view the field. It may exist that some stadium elements will block your view, which will happen with corner kicks in small fields, or there may be something even worse: the shadows cast by those elements on the pitch. They are responsible for obstructing the view of the ball and sometimes the players. If you often play during the day and feel uncomfortable with the shadows, pay more attention to the stadium you select. Generally speaking, the highest cameras are the most popular ones. They are awful for a dribbling style but greater if you love long throws, pace and long shots. They give you the chance to see a better distribution of the players on the field.

GOAL NET COLOURS
You can customize your stadium choosing the colour of the goal net.

PITCH LINE PAINT
You can customize your stadium choosing the colour of the pitch line. This is the only customization that your opponents will not see when playing on your stadium.