BUNDESLIGA PLAYER OF THE MONTH

The official “Player of the Month” award was introduced to the Bundesliga for the first time in FIFA 19. The award was created by DFL Deutsche Fußball Liga in cooperation with the Bundesliga’s official licence partner, EA Sports. It is awarded in a two-stage selection process. In the first stage, the six Bundesliga players with the best individual performance data are identified each month. The selection is based on the extensive live data gathered by the DFL subsidiary Sportec Solutions for every Bundesliga match. The POTM shortlist is compiled according to around 20 criteria, including the number of goals scored, goal assists and the tackling rate of the individual players. In the second stage, one of the six nominees chosen according to objective performance criteria is voted POTM. Votes can be cast by the team captains of the 18 Bundesliga clubs (30% vote share), a select panel of experts comprising Bundesliga legends and media representatives (30%) and fans from all over the world (40%). The winner receives a FIFA 20 POTM item, with boosted stats, which is made available via SBC.
WINNERS LIST

List of players who received a POTM item in FUT

List of players who received more POTM items in FUT

List of nations who received more POTM items in FUT

List of clubs who received more POTM items in FUT

FIFA 20 BUNDESLIGA PLAYER OF THE MONTH

POTM nominees, the winners, the vote results, the SBCs, the release dates and the new FIFA 20 cards. All release times are indicated in the UK time zone.
AUGUST 2019
VOTES
VOTES
Official dates

WINNER
WINNER
The winner was announced on September 20, 2019

FC Bayern München’s Robert Lewandowski has enjoyed perhaps his best ever start to a Bundesliga season. His haul of six goals from the first three games is the best by any player for 14 years. The Poland captain averages a goal every 45 minutes, which is the best rate in the league for a player to score more than one goal. The striker is always good for a record, and he set up another on Matchday 1 against Hertha Berlin when Lewandowski became the first player ever to score on the opening weekend for five consecutive seasons.

Harit hand a direct hand in six Bundesliga goals in September (four goals, two assists) – more than any other player. Indeed, he’s already registered more goals and assists after six matches than he managed over the entire course of 2018/19.
OFFICIAL MEDIA
SQUAD BUILDING CHALLENGES
SQUAD BUILDING CHALLENGE
How to win this POTM item

WINNER
WINNER
The winner was announced on November 19, 2019

Across the entire Bundesliga, the Stuttgart-born winger was involved in the most efforts on goal in October (24), including 14 shots of his own. Only teammate Robert Lewandowski managed two extra strikes on goal – thanks to the assists Gnabry supplied.

WINNER
WINNER
The winner was announced on December 20, 2019

The 23-year-old is in some of the best form of his career, playing a part in no fewer than 12 (!) goals for his team (seven goals, five assists) and, as a result, he has had a hand in more goals than anybody else in the Bundesliga this season, with the exception of Bayern Munich forward Robert Lewandowski. His return in November, both in terms of goals and assists, was unrivalled.

WINNER
WINNER
The winner was announced on January 17, 2020 Timo Werner continued to torment Bundesliga defences into December, scoring five goals to take his tally to 18 at the halfway stage of the season. That haul also made the Germany international the sharpest shooter in Germany’s top flight for the month, while he had more efforts on goal (23) than anyone else in the league.

WINNER
WINNER
The winner was announced on March 20, 2020

Jadon Sancho has been unstoppable in recent weeks, chalking up three goals and another three assists in the Bundesliga for Borussia Dortmund in February. With a direct hand in six goals, he was the most prolific source of goals in the Bundesliga last month alongside Christopher Nkunku and Serge Gnabry. He also set up teammates 13 times, which was the most of any BVB player. However, February was just the tip of the iceberg for Sancho this season.

No early predictions were made for this month.

WINNER
WINNER
The winner was announced on June 16, 2020

No player netted more times in May than Kai Havertz, who added to his growing reputation with five goals to help Bayer 04 Leverkusen’s top-four push. All of those strikes came away from home – two with his head, two with his left foot, and one with his right foot – and when Havertz got on the scoresheet Leverkusen won. 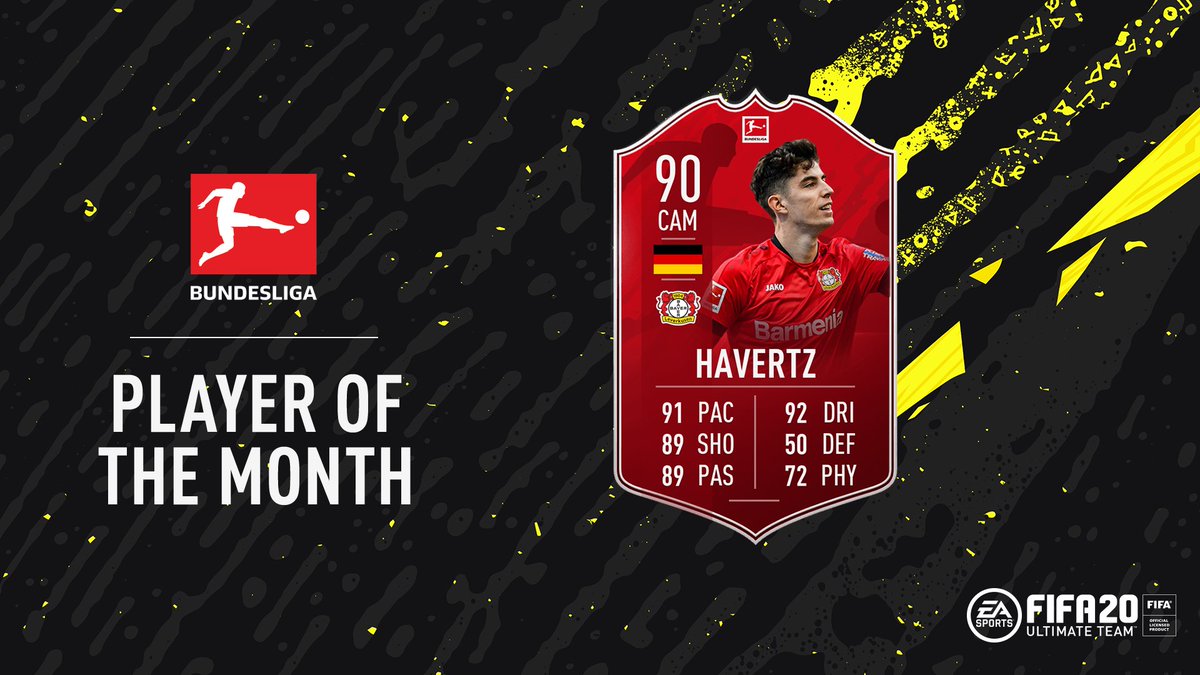 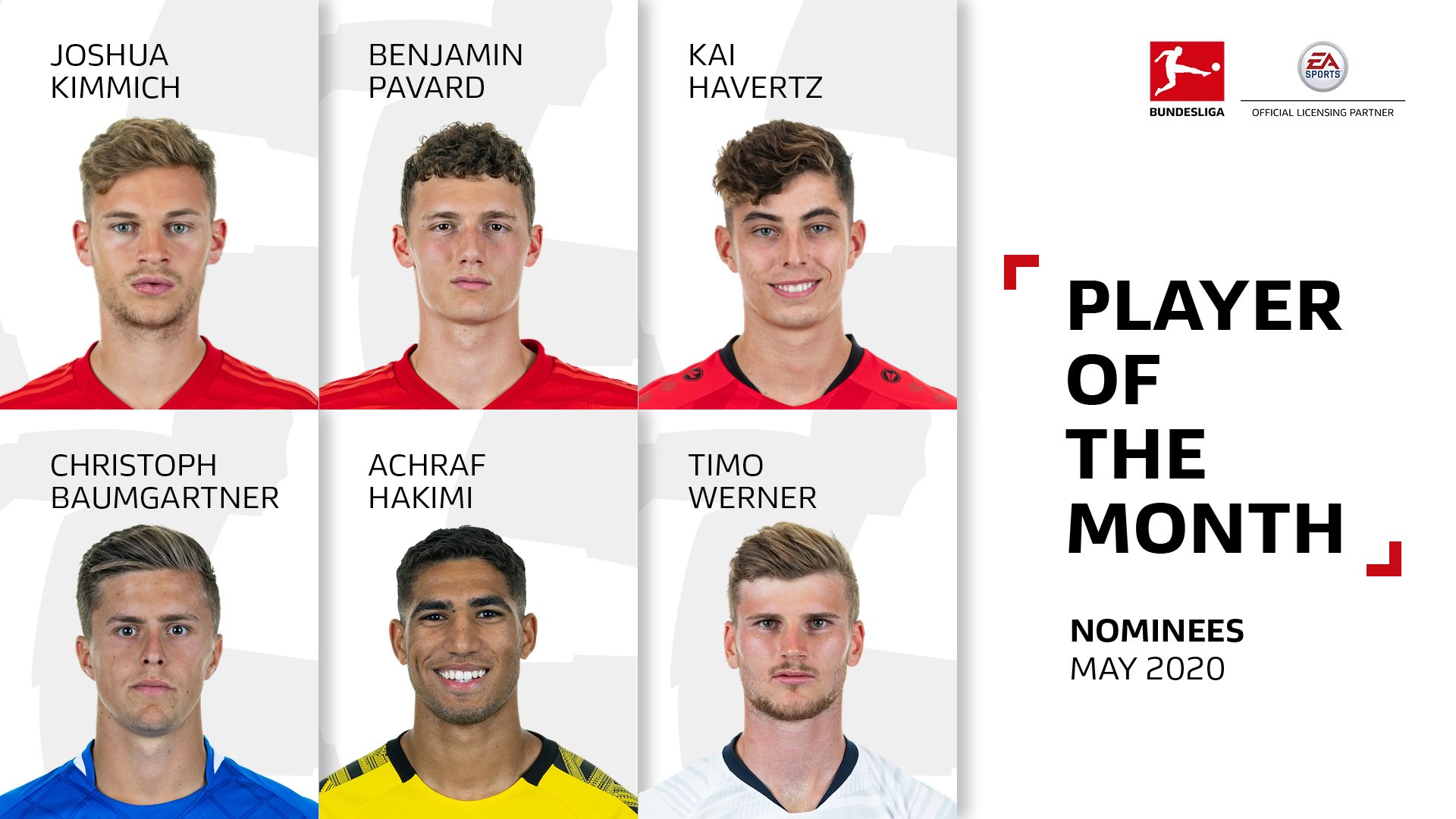 Coming soon
NOMINEES
NOMINEES
Nominees are expected to be announced around July –, 2020