PREMIER LEAGUE PLAYER OF THE MONTH

Every single month, EA Sports makes a selection of the most in-form Premier League players of the previous month. The award is decided by a combination of a public vote, counting for 10%, and those from a panel of Premier League experts and current club captains. The winner receives a FIFA 20 POTM item, with boosted stats, which is made available via SBC.
WINNERS LIST

List of players who received a POTM item in FUT

List of players who received more POTM items in FUT

List of nations who received more POTM items in FUT

List of clubs who received more POTM items in FUT

POTM nominees, the winners, the vote results, the SBCs, the release dates and the new FIFA 20 cards. All release times are indicated in the UK time zone.
AUGUST 2019
VOTES
VOTES
Official dates

NOMINEES
NOMINEES
The Nominees were announced on September 6, 2019
COMMUNITY VOTES
COMMUNITY VOTE RESULTS
Who our community thinks deserves to win

WINNER
WINNER
The winner was announced on September 13, 2019

Norwich City’s striker enjoyed a dream start to his Premier League career. The Finn became only the 10th player to score in his first three appearances, netting in the season opener at Liverpool before getting a hat-trick v Newcastle United and a goal and an assist against Chelsea.
OFFICIAL MEDIA
SQUAD BUILDING CHALLENGES
SQUAD BUILDING CHALLENGE
How to win this POTM item


NOMINEES
NOMINEES
Nominees are expected to be announced on November 01, 2019

Although Vardy’s month started with a stoppage-time loss at leaders Liverpool, it ended in the most spectacular of ways. After scoring in a 2-1 victory over Burnley, he struck a hat-trick as Leicester beat Southampton 9-0 for the biggest away win in the competition’s history. The Englishman earns the award for a fourth time, two of which came in Leicester’s 2015/16 title-winning campaign and the other in April of this year.
OFFICIAL MEDIA
SQUAD BUILDING CHALLENGES
SQUAD BUILDING CHALLENGE
How to win this POTM item

NOMINEES
NOMINEES
Nominees are expected to be announced on December 03, 2019

WINNER
WINNER
The winner was announced on December 13, 2019

Mane’s three goals and one assist helped Liverpool win all four matches to go eight points clear at the top of the table. The Senegalese started the month with an inspirational performance at Aston Villa, setting up Andrew Robertson’s 87th-minute equaliser before heading in the winner in stoppage time. He then scored against champions Manchester City and at Crystal Palace.
OFFICIAL MEDIA WINNER
WINNER
The winner was announced on January 10, 2020

The right-back played all five matches as the leaders beat Everton, AFC Bournemouth, Watford, Leicester City and Wolverhampton Wanderers to go 13 points clear. He also helped the Reds lift the FIFA Club World Cup for the first time, but perhaps his best performance came at second-placed Leicester, against whom he scored once and set up two goals in a 4-0 victory. WINNER
WINNER
The winner was announced on February 07, 2020

The Argentinian scored six times and got an assist in just three appearances as he became the highest-scoring overseas player in Premier League history. His hat-trick in a 6-1 win at Aston Villa took him past Thierry Henry’s 175 goals, and with his 12th treble in the competition he surpassed Alan Shearer’s record of 11. 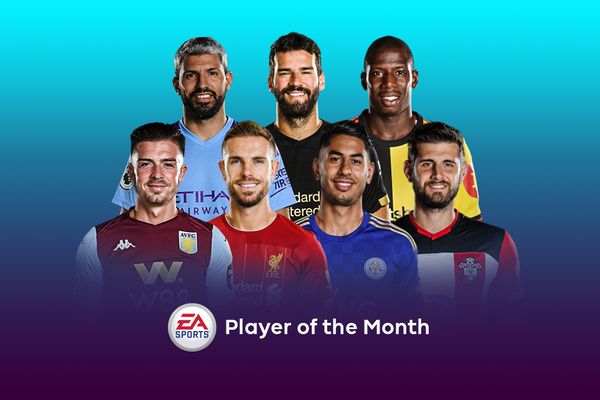 WINNER
WINNER
The winner is expected to be announced on March 06, 2020

The Portugal international midfielder, who made his debut for Manchester United on 1 February, made an instant impact after arriving from Sporting Lisbon in the January transfer window. He impressed in his first match against Wolverhampton Wanderers before getting an assist in a crucial 2-0 victory at top-four rivals Chelsea. Fernandes then starred in a 3-0 home win over Watford with a goal and an assist on what he describes as a “special” day. EARLY PREDICITONS
No eraly predictions were made for this month.
NOMINEES
NOMINEES
Nominees were announced on July 03, 2020

WINNER
WINNER
The winner was announced on July 10, 2020

The Portuguese earned his latest award after scoring four goals, including a double against Brighton & Hove Albion and a penalty at Tottenham Hotspur in June. He also found the net at Everton, with the performances in the first half of March also taken into account. 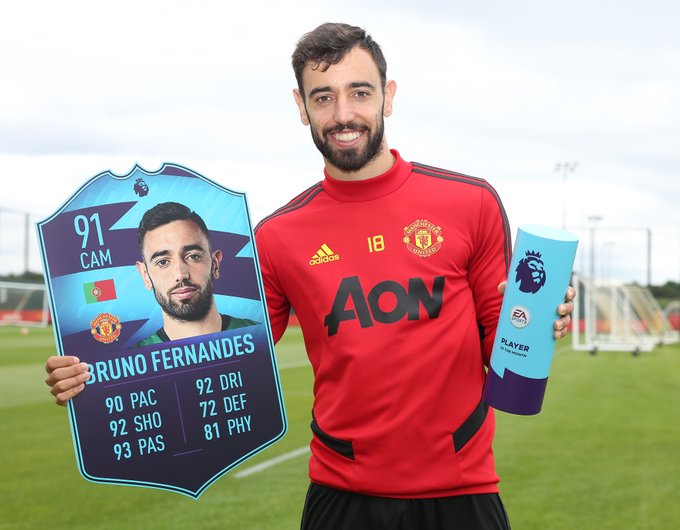 EARLY PREDICITONS
No predictions were made for this month.
NOMINEES
NOMINEES
Nominees were announced on July 30, 2020

WINNER
WINNER
The winner was announced on August 5, 2020

Antonio scored eight times and provided an assist in the final seven matches, with David Moyes’ side winning three and drawing three to finish five points above the relegation zone. The striker also became the first West Ham player to score four goals in a single Premier League away match, achieving the feat in a 4-0 victory at Norwich City. 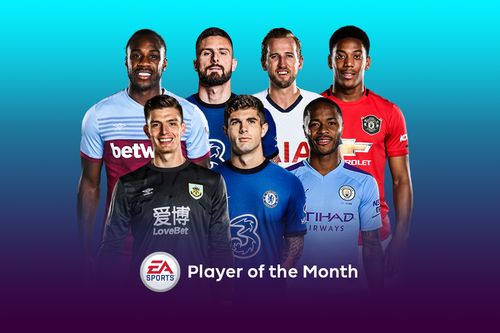