Here you can find some FIFA 14 tips about how to score goals from new angles.

Shooting has noticeably changed in FIFA 14, meaning that there are now different ways in which to score. Players now have a chance of scoring from unusual angles, particularly those which used to require turning to face directly at goal and often result in being intercepted. If not directly in front of goal but facing the byline, aim towards the far post and your attacker will attempt to use his momentum and the enhanced ball physics to finish, all without the risk of the shot being blocked. Similarly, if your player is moving away from goal but has the ball come across him to his strong foot, then he will attempt to wrap his foot around the ball which often means the shot may swerve back into the far post.

It appears that it is now easier to score chipped attempts in one-on-one scenarios rather than attempting to take it around the keeper. It takes practice to get the power right from various distances, particularly when in close. It is tempting to take a desperate stab towards goal when in close, but it is possible now to get the ball up and down within the penalty area. If you still prefer to take on the keeper, then remember you have to hold RT or R2 whilst knocking the ball ahead of you with RS. This makes it trickier to score, but by running at angle and not changing shape, your player should have enough momentum to get by.

If you are having trouble with technical shooting, then something as simple as an early shot can be just as effective at catching out the opposing team. If an attacker receives the ball in an advanced position, then shooting quickly before your opponents defence has time to re-shape can mean catching them out of position. This is especially true if a ball is played into the box and the keeper hasn’t had time to get in the correct position goal. Shooting early with a player does usually require a player with good finishing stats, so it is definitely worth looking through your squad before a match to get an understanding of what your team are capable of.

This week tips on The Boot Room, Darren Cross from Match Magazine shares in a video how to score goals from new angles in FIFA 14. 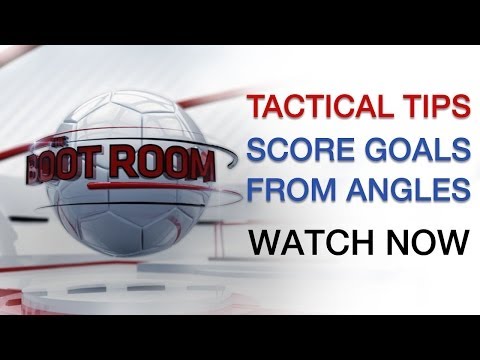 We will publish more FIFA 14 tips that help you to improve your game play. Stay alert and good games!