For all those players who plan to build a FIFA 18 Liga NOS squad, we’ve conducted an extensive analysis on the best players.

Here is our guide to the top Portuguese league in FIFA 18 Ultimate Team.

This article aims to help those that want to form a FIFA 18 Liga NOS squad. Even the players that already have a team based in this league, could take out some valuable conclusions from this guide that could help you make your team even better.

✔️ Only Regular Players
In this guide, we didn’t consider In Forms (IF). They’re extremely expensive and in most cases are not considered good value for money. They should only be used by players with generous budgets, that already have the best team possible and that want small upgrades.

✔️ Fluctuation of Prices
In the chapter where FIFA 18 Liga NOS squads are suggested, we added a link where you can check anytime the updated prices.

The team suggestions that follow should serve merely as orientation because it’s impossible to build a team that fits everyone. They depend on various factors we don’t know such as budget, formation, style of play and player preferences.

To try and explore the needs of the maximum player as possible we suggest two teams with different budgets and formations: 4-1-2-1-2 with unlimited budget and 4-4-2 with a low budget. 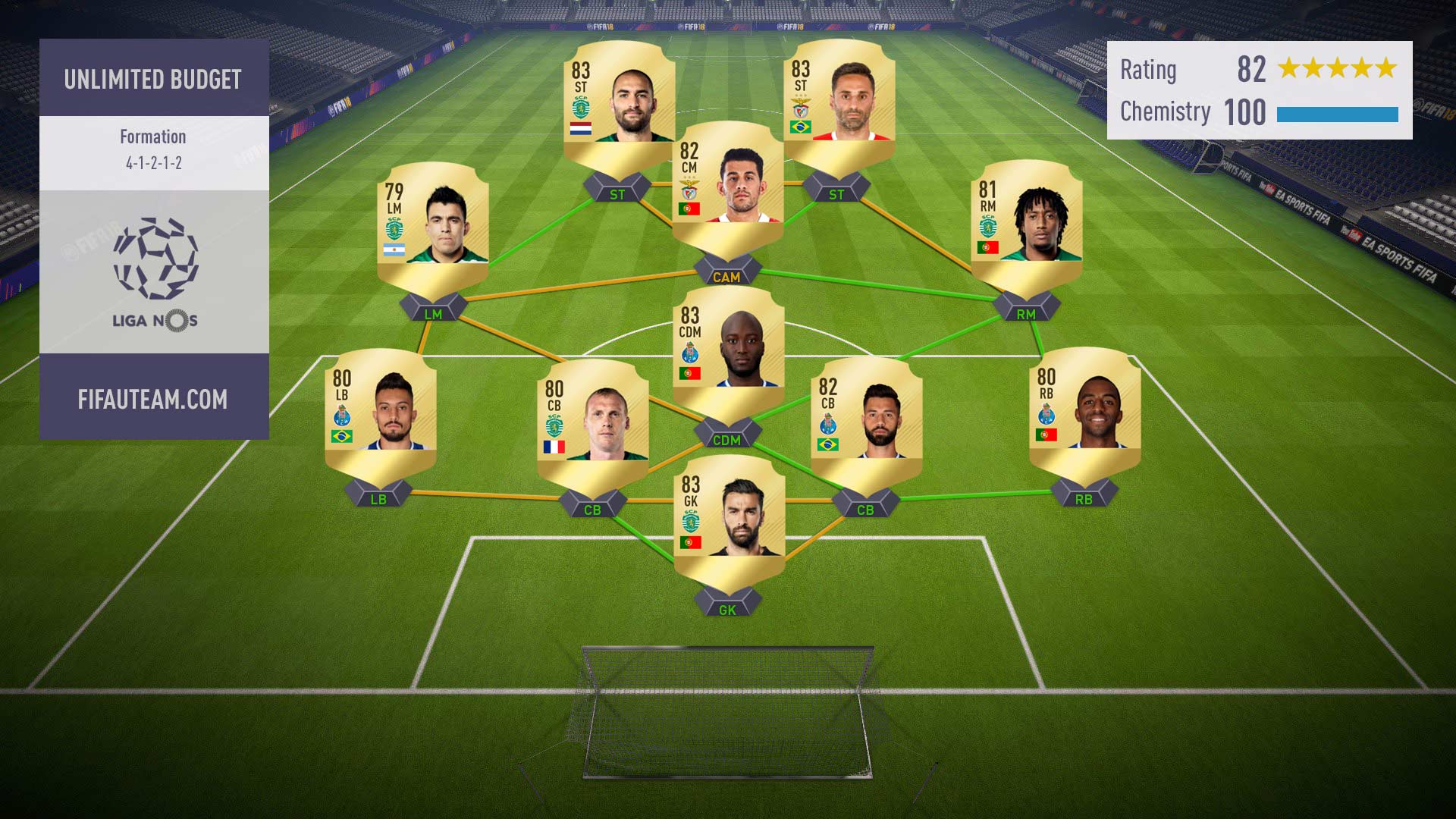 Liga NOS has good goalkeepers. Your goal will be in safe hands whether you choose Rui Patrício or Iker Casillas. Both have improved cards.

Felipe, Mathieu and Ricardo Pereira are untouchables in the defence. Alex Telles is also a good defender but it’s not easy to choose between him and Grimaldo. There are other players with good defensive and physical skills but they are usually too slow. It’s the case of Sebastián Coates and Jardel.

Liga NOS has two good defensive midfielders. Danilo Pereira, our favourite, is faster and a more complete players, while William Carvalho is more creative. For the CAM position, Pizzi is the best one. We love his high/medium work rates and amazing stamina.

Who builds an unlimited budget Liga NOS squad should use a formation with wingers. There are quality choices for this position. On the right, Gelson Martins is a extremely fast 5 starts dribbler. It’s incredible how a player like him is so cheap. On the left side, Acuña is less popular than Brahimi but gives more options to the team.

Jonas and Bas Dost are the perfect pair to the attack. The Brazilian striker plays much better than his stats show. Crossing to the Dost’s head is for sure one of the best ways to score with this team.

This is a extremely cheap squad. Since many of these players already received an IF or special affordable card, you can easily improve it. 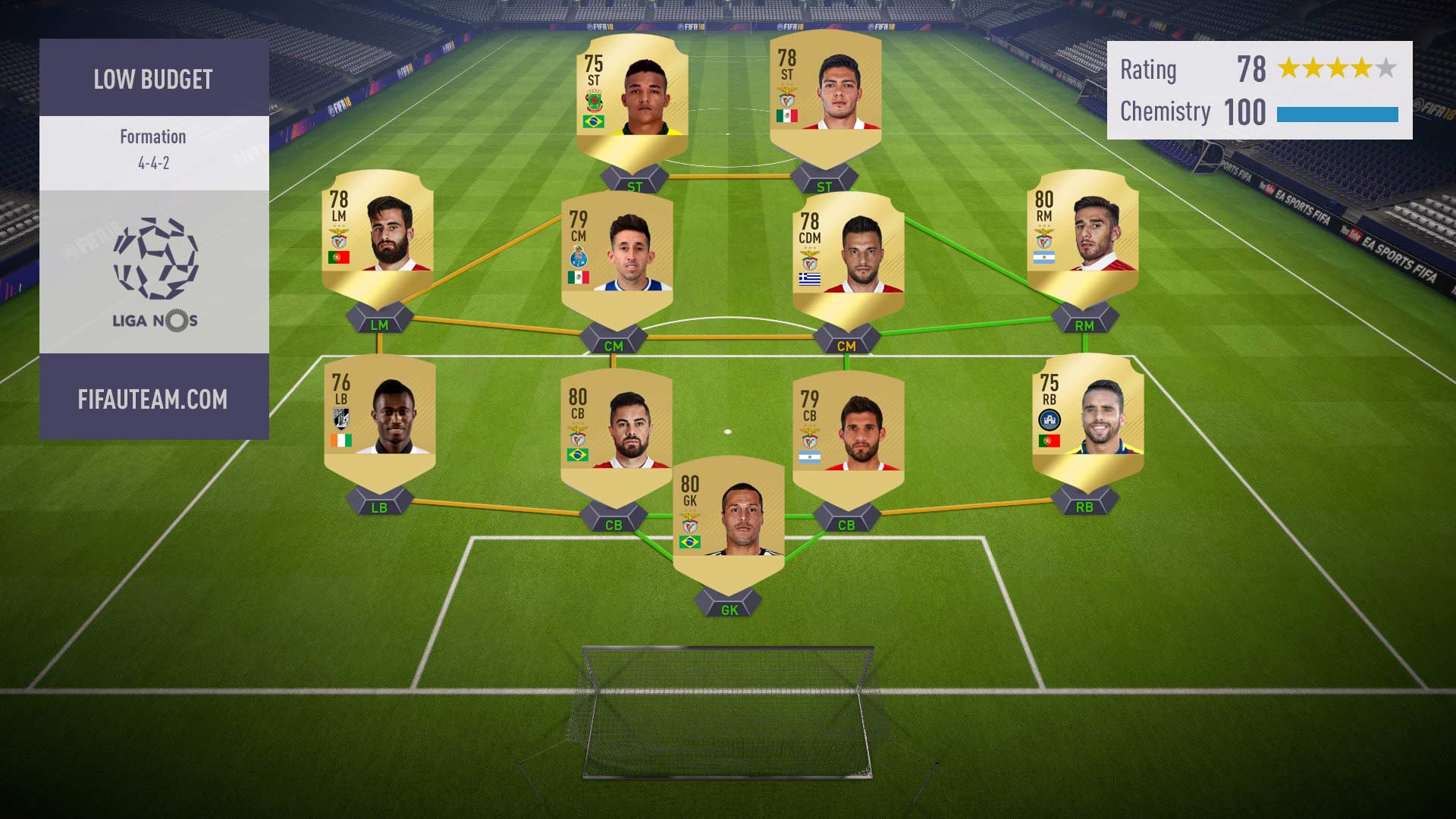 In the goal, Júlio César will try to keep your goal safe, with the help of Paulinho, Lisandro López, Jardel and Konan..

In the midfield, you will need someone able to help the the back line. Samaris is the perfect man for that job, giving more freedom to Herrera do what he likes to do. If you want a more attacking player, picks Bruno Fernandes instead of him.

In the attack, the wingers Salvio and Rafa (can be replaced by Cervi) have the mission to assist Raúl Jiménez and Welthon.

If you still have some room in your budget, Jonas is the player that would improve this squad a lot.