FIFA 22 Consumables are items that can be used on players and managers to improve some of their characteristics.
Items
Contracts
Healing
Position
Styles
Leagues
Items
Contracts
Contract Items are responsible to increase the number of matches a player or a manager can play.

Contracts are the second most important FUT item, just after players. Strategically it is an item with great importance because it is the only consumable required in order to play matches. You will need to buy contracts if you want to play. You have no choice.

Except for loan items or starter pack items, when a player or a manager is released, he comes with 7 contracts. The number of contracts printed on his item decreases every time you use him in a match. When it reaches zero, he cannot be used in a match until you apply him a contract item again. These items can be applied at any time. You don’t have to wait until they run out of contracts. The player’s items that are out of contracts are distinguished from the others by having a folder icon and can be sent to the transfer list like all the other items.

The number of matches that a player or manager item has cannot be higher than 99. It is also not possible to apply contracts to players on loan. Anyone that plays a match spends a contract, even if he started the match on the bench. That’s why you should avoid making many substitutions.

For each match you play, you spend something like 60 to 80 coins on contracts. To save a few coins you should pay attention to the following tips:
1) For the same price, always choose the contracts’ items that give you more matches;
2) Do not use contract items with many matches on players/managers who you do not know if will be in your club much more time;
3) Do not waste contract items if it exceeds the 99 matches;
4) Only make substitutions that are strictly necessary;
5) Buy a few managers besides the main one; 6) Only assign a manager to your squad if you need to him to improve the chemistry; 6) Buy contracts during certain times, like huge Promo Packs releases, special In Form releases and at the beginning of the game.

It is advantageous to apply a contract item of the same quality as the player or amanager item. However, it doesn’t need to be like that. For example, you can apply a bronze contract item to a gold player. The big trick is not do not spend a lot of coins on contracts but to store managers in your club that give you a bonus of up to 50%. Furthermore, always study the relation price vs the number of matches. Sometimes a silver contract card may be the cheapest option for your gold player.

Contract items are cheaper for managers when compared to the ones that can only be applied to players. However, if you want to pay even less, try to buy them on the transfer market just after rewards are delivered.
Healing
Healing Items are responsible to reduce the downtime of an injured player.

Any player can get hurt in a match. The chances of it happening are higher if he has low fitness and if the opponent uses an aggressive playing style. When he gets injured, you can see on his item the number of matches he will miss. If you leave him to rest on the reserves for as long as the period of the injury, he will heal naturally and become available again. If you want to use an injured player immediately, or at least reduce his downtime, you can apply him a healing item.

In FIFA 22 Ultimate Team, the items of injured players have an ‘X’ on them. It is not possible to use a healing item on players who are not injured. On the other hand, you can apply as many healing items as you wish to injured players.

There are only two Healing Items in the game: Gold common and rare Items. These will be applicable to any injury type and will reduce the injury duration by 2 matches and 5 matches respectively.

If you usually keep your squad’s stamina high and if you avoid aggressive opponents, then injuries are very rare. Even if it happens, the downtime will be only one or two matches. That’s why there is no reason to buy rare healing items which reduce the downtime in 5 matches.

The common healing item should only be used if you really need a player in particular that’s got an injury. Most of the time you can avoid using healing items if you own quality backup players. You will be able to put the injured player in the reserves and replace him with another one.
Position
Position Modifier Items are responsible to modify the position of a player.

Although players could play in any position, the team’s chemistry and the individual chemistry are strengthened if they are placed in the position printed on their cards or, at least, in a similar position. As it is not always possible to make these positions match, there are modifier items that help you to solve this problem.

Position Modifier items allow you to change the preferred position of a player to the one that is printed on his item. For each item that you use, you can change a single player’s position once. Using several items, you can change the player’s position as many times as you want, including getting back to his original position. Before applying one of these items, make sure that the player already doesn’t have maximum individual chemistry. If he does, you don’t have to use the modifier item. Keep in mind that the modifier items contain information about the old and the new position. If a player’s favourite position doesn’t match with the old position printed on the item, you cannot apply that item to him.

When a player is assigned to play in a strange position to himself, the chemistry is strongly affected. Independently of his connections with teammates, he will never have more than individual chemistry of 4, which is very bad. However, it will also affect team chemistry.

Each position item can only be applied to a player and the effect lasts until you use a new position item on him. Sometimes, you need to use several items to get the position you want. For example: to transform a CAM into an ST, you need to use a CAM-CF item and then a CF-ST item. On other hand, goalkeepers’ position cannot be changed to anything else. This image shows you the sequences you can make to change the preferred position of a player. 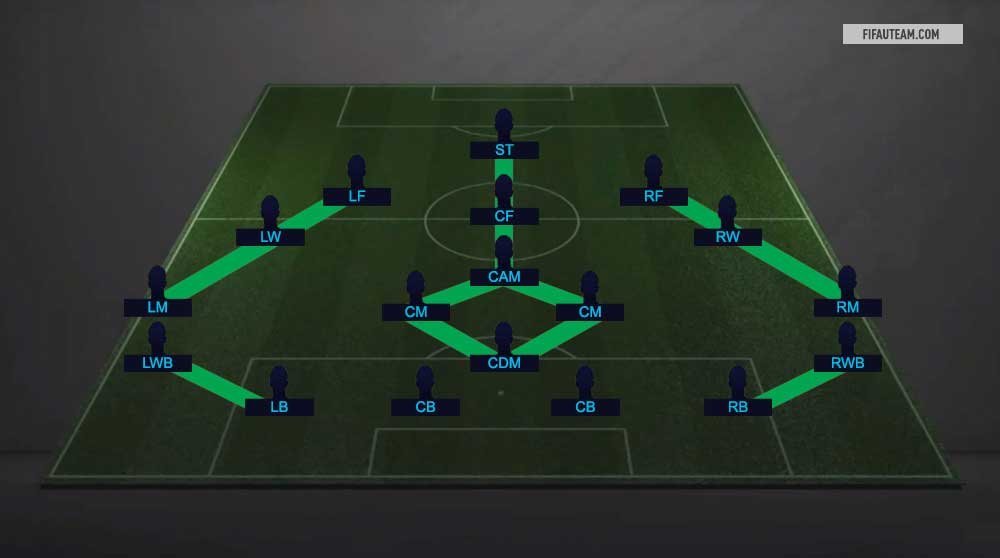 Styles
Chemistry Style Items are responsible to allowing players to choose which attributes will be affected by the chemistry.

Chemistry Styles allow you to choose what stats are modified but not by how much. It depends on your chemistry. If you get individual chemistry 10, you will get the highest improvement possible on the stats you have chosen. Looking at the table below, you can see, for example, that if you place a player with chemistry 7, he will lose half of the boost. In the same way, if he only has chemistry 4, it makes no sense to apply him a chemistry style since no stat will be boosted. To chemistry values lower than 4 the in-game stats of the particular player will gradually be lowered, hindering the player’s ability. Not having full chemistry is very penalised in the way how our players play. That’s why we strongly recommend getting individual chemistry 10 to all players. For those that it is not possible, try to get at least individual chemistry 7.


Chemistry Style Items can be applied to a player to modify his playstyle, adjusting his attributes to the squad needs. These items do not change the chemistry numbers. They redistribute the stats that will receive chemistry boosts.

Styles can be applied to each player as many times as you want but only one per player at a time. He will keep with the style until a new chemistry style is applied to him. When someone trades a player item, the buyer will keep the style that it is active.

Managers give a boost to the contract items, but they also contribute with one point to the individual chemistry of all players from the starting eleven that have the same nationality or the same league as them. As it is not always possible to match the leagues, there are items that help to solve this problem. They allow you to modify the league printed on the manager item to the one that is printed on the card. For each item you use, you can modify the league once. You can use them as many times as you want. The effect lasts until you apply a new league item on that manager.

Chemistry is very important for the success of your team. Try to get the highest individual chemistry possible for all of your players. If you are not building a squad with a single nationality it is extremely important to use a league modifier item. These items can be applied to any manager stored in your club. However, it makes no sense to apply them to other managers besides the one that goes on the bench unless you are planning to change managers according to the players you choose for each game.

It is also recommended to only apply the most expensive league items when you have set your squad. Otherwise, each time you change your players, you will need to use another league item on your main manager to match his league with the players that have lower individual chemistry.
DETAILS
In modern football, good players don’t make a winning team. They need to be supported by their club. It may be a good contract or a simple treatment for an injury.

To apply a consumable you should start by selecting the player or the manager in which you want to apply, going to ‘Squads’. With the item selected, you just need to choose ‘Actions’ and then ‘Apply Consumable’. This will bring up a list of all consumables, sorted in folders, and you will be able to choose the one you want to use. Once they are used, they expire.