Skip to content
To find what mentally separates the pro FIFA players from the standard FIFA player, we invited Andy Wakefield. He is a postgraduate student in Applied Sports Psychology based in London, who has been playing FUT since FIFA 10, hoping to pursue a career in Sports Psychology within esports.
For my next post on sports psychology and FIFA I thought I would talk about the research I’m conducting as part of my Masters! It is based in comparing the minds of elite FIFA players and elite football players. The hope is this will give some insight into what separates the pro FIFA players from the rest of the player base. The terminology can get confusing, so I’m hoping this post should be easy enough to understand!

Pro FIFA players and an average FIFA player have obvious differences in time spent playing the game, learning the most effective mechanics and playing/learning off the best players in the world daily. However, little to nothing is known about how they differ mentally. Generally, there is hardly any sports psychological literature on esports as an emerging genre of sport.

In real-world football, skilled players and less-skilled players can be separated by their ability to remember and perceive patterns of play. What does that mean? Essentially it means that elite football players can remember and recognise a combination of passes that lead to a shot with greater accuracy than a Sunday league footballer. They can do this in experiments whereby they are given 40, 3-second clips and distinctly recognise what they have and haven’t seen before with great accuracy. Compared with, less-skilled players who show a lot less accuracy. This finding is reliable in a range of sports such as hockey, basketball etc. There is even some crossover, for example that elite football players can recognise patterns better in team sports than less-skilled individuals.

My research aims to look at FIFA esports players and see whether their recognition of patterns of play is similarly good. And to compare them to elite football players and see if there is any crossover between the two. 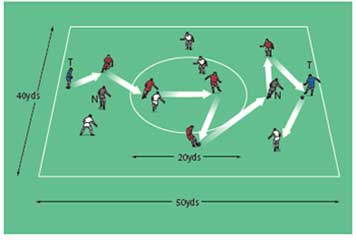 Interestingly all the clips that will be used are from FIFA 19 over the past 3 months of pro events. With the gameplay in a state whereby it is not very realistic it will be interesting to compare the two. The experiment will also look at football players and their ability to recognise patterns of FIFA gameplay. So that will also be super interesting!
If this interests you, I am looking for people to take part in this experiment! Either if you are a high-level football player or high-level FIFA player (Hitting Elite 3 or above in FUT Champs). Contact me filling the following form.