You can find here some tips about how to defend against opponents in FIFA 13 matches.

How You May Defend Better in FIFA 13

Here are some of the tips that you should try in order to know how to defend against opponents in FIFA 13 matches:

To defend against pace make sure you don’t pull your centre backs out of position. Never contain or secondary contain with them. Reduce space behind your defence by setting up a custom tactic, lowering pressure and setting your defence to cover.

To defend against technical players, make sure you don’t dive in – that’s what they want you to do! Stand your ground and let the game tackle for you. Goad your opponent into doing a skill move, then tackle them when the opportunity arises. Remind yourself that you’re playing against a skiller! They are far more likely to try a spectacular goal than a simple tap in. Expect this and change your game accordingly.

To defend against passing players, don’t bother pressing the ball if your opponent is passing it around in their own half. Let them do it and keep your shape. Use RB (XBox360) or R1 (PS3) to secondary contain the player on the ball and move your selected player into position to cover a pass or run.

Have counter attack in your quick tactics so you can attack on the break if your opponent has pushed their players forward.

Use the radar to see where spaces are opening up and fill those gaps!

How You May Defend Better in FIFA 13 Video

This week tips on The Boot Room, Darren Cross from Match Magazine shares defending against opponents tips in FIFA 13. 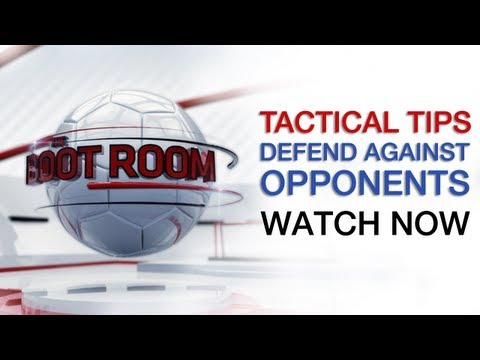 We will publish some more articles that help you to improve your game play. Stay alert!

2 thoughts on “How You May Defend Better in FIFA 13”