There are some advanced techniques moves in FIFA 13 Ultimate Team that you should know to take advantage over your opponents.

Here are some advanced techniques moves that you can use in FIFA 13 Ultimate Team matches:

To XBox360: RB
To PS3: R1
Hold when receiving the ball to let the ball run between your legs and then run onto it. Fools defenders into thinking you’re going to take a touch, leaving you to run into space and have a shot on goal. Use anywhere on the pitch if you’re under pressure but most effective on the edge of the box.

To XBox360: Hold RB, A or X
To PS3: Hold R1, X or square
Use to pass the ball faster to a team mate. Very useful in the rain to make sure the ball gets to one of your players.

To XBox360: X, A
To PS3: Square, X
Use direction to control where you move during and after the fake pass. Use the same move when receiving the ball to perform a fake control, immediately turning and spinning into space instead of playing a one-two.

To XBox360: Flick RS
To PS3: Flick RS
Flick in the direction you want to go as the ball arrives at the player’s feet.

To XBox360: B, A
To PS3: Circle, X
Take your thumb off the left stick as well to stop the ball dead and then run into the space created by the approaching defender. Turn onto the player’s strong foot if attempting a shot on goal. Use these moves sparingly in combination with passing and moving to mix your game up and keep your opponent guessing.

This week on The Boot Room Darren Cross is talking advanced techniques you can use to mix your game up a bit. 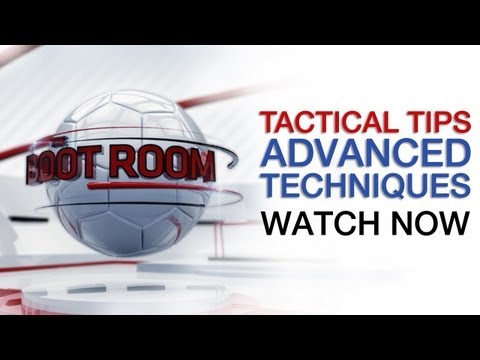