You can find here some FIFA 14 tips about squad formations.

Formations are a key part of any team and should be the first thing that is considered when starting a team.

A good starting point is the 4-5-1 as it provides a solid defensive line whilst also supporting your lone striker on the counter-attack. If you are finding it difficult with a single striker, then the 3-5-2 might be a better choice. The extra striker means you have a number of attacking options, though you will be more exposed at the back with just three defenders.

A formation that will cover all positions is the 4-1-2-1-2. There are two versions of this formation, one with wingers and one with central midfield players. Either way, you have several options going forward as it can be played out wide, through the centre or across the midfield. In defence, you have a solid back four with one supporting midfielder which makes it difficult for other teams to get through on a counter-attack.

For a player who can manage with a lone striker but needs numbers in both defence and midfield, the 4-2-3-1 ensures that you have numbers where it counts. The two CDMs will add numbers in both defence and midfield to crowd out the opponent. This works well with inverted wingers, which involves switching your LM and RM to support a lone striker. If the more unusual formations aren’t working, then going back to the classic 4-3-3 can give you the best opportunity to experiment with tactics. It works with a big striker who can win crosses or use the numbers to string a number of passes together.

This week tips on The Boot Room, Darren Cross from Match Magazine shares in a video how to set Squad Formations in FIFA 14. 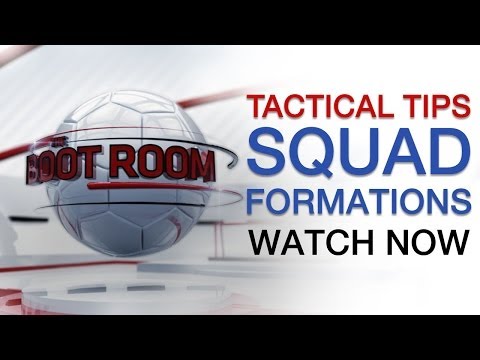 We will publish more FIFA 14 tips to help you to improve your game play. Stay alert and good games!