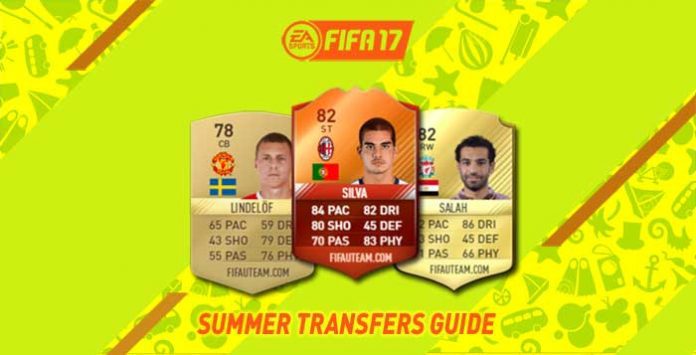 Players don’t switch between clubs only on the real life pitch. That also happens on FUT 17. Take a look at how the FIFA 17 Summer transfers work on FIFA Ultimate Team.

Q: How are transfers made on FIFA 17 Ultimate Team?
A: When a player switches between clubs in real life, a new card of him with the a new club is released.

Q: When is the transfer season on FIFA 17?
A: There are two transfer seasons throughout the game: winter and summer transfers. The first one happens in January / February and it implies on there being two cards of the same player. The summer transfers update is there for the transition between games. Until the FIFA 17 launch date, a player may have two cards with two different clubs but only the new one will be released in packs.

Q: If I have a card of a player that moved to a new club, will this card get an update?
A: No. It remains exactly the same, with the old club on it.

Q: Are there two regular cards for a single player that was transferred?
A: Yes. One corresponds to the start of the season and the other corresponds to where he moved to during summer transfers.

Q: Do players on loan also get a new card?
A: Yes. A player gets a new card just as long as he starts playing in the new club.

Q: What happens with the retired players’ cards?
A: They no longer are available in packs. The existing ones keeps like they are without any change.

Q: When do the new cards take place over the old ones in packs?
A: EA Sports don’t release them all at once. The usual expectation is for biggest part of the update to be made on the FIFA 17 launch date. However, they also release cards before this date, starting at June 30.

Q: Do all transferred players get a new card?
A: Supposedly that should happen, and it effectively does on the most popular leagues. But some players from less popular leagues end up “forgotten”, although generally EA’s cover is quite wide and efficient.

Q: When summer transfers will be released?
A: The first ones were released in June 30.

Q: What were the cards that got updates last year?
A: You can see them here.

Q: What players will have new cards for having switched between clubs?
A: Here are some examples: Jordan Pickford, Mohamed Salah, Ruben Semedo, Ederson, Victor Lindelof, Ricardo Rodriguez and André Silva.

Q: Why can’t I find a player that was transferred this Summer?
A: Probably because in the beginning of the game he played for a club that isn’t in FUT 17. Only players that were once in the game’s initial database will potentially get new cards, otherwise they won’t be there, not even if they’re moving to a FIFA 17 licensed club.

Q: Why did a certain player stop coming from packs?
A: Because he moved to a club that’s not in FIFA 17. He was removed from packs.

Q: Where I can find these cards?
A: You can pull them from FUT packs or buy them on the transfer market. With the new weekly Marquee Transfers SBCs you will be able to earn a loan item of the most exciting summer transfers of players to try them out on their new clubs.

Q: How do player transfer cards look like?
A: They are the same regular cards as those on the image below.

Q: What’s the difference between the original card and the new one?
A: The only thing that changes is the club. All the rest remains the same, including position, rating and stats.

Q: Can I have both the original and the new card in my club?
A: Yes. However, you can only use one at a time.

Q: Can a transferred player receive an upgraded card?
A: Yes, he can. In that case both situations are passed on to one single card.

Q: What advantage do the FIFA 17 Summer transfers bring?
A: Once the new cards are released, league/club possible combinations increase, which makes it easier for us to build squads with good chemistry.

Q: I already have a squad. What is it good to me?
A: If your squad is based on a league, for example, Summer transfers season will increase your options to improve your squad because there will be more players available in the league you’re using.