FIFA 17 TOTY cards are the most wanted In Form players cards of the game. Let’s learn something more about these blue cards, including the release date, the stats boost, the nominees, the prediction, the leaked squad and the prices.

Every year since FUT 12, in early January, Electronic Arts build a team of players based on their real performance on the previous year. The players of this TOTY are selected from the voting of FIFPro, the world wide professional footballers association, and announced in the FIFA Ballon d’Or Gala. They are supposed to be the best players in the world. When FIFA 17 TOTY Cards will be available?

The Team of the Year is released once per year. In FUT 17, the TOTY will be announcement and released on January 9th, 2017 (Monday).

These very special blue cards are assigned only to eleven players (a goalkeeper, four defenders, three midfielders and three forwards), that can be of any league and quality. It is only made a distinction between the four lines, not between each position. For example, instead of having full backs, this team can have four centre backs. Usually they are all gold and play in LaLiga Santander, Premier League and Bundesliga.

In FIFA 17, TOTY cards are announced on the Ballon D’Or Gala at 5:30pm (UK time) and released in packs at 8pm. You can pull a TOTY card in any gold pack with rare gold players cards.

The FIFA 17 TOTY cards will be available into packs on the following days: 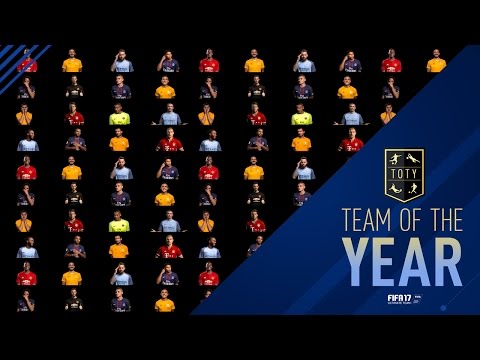 The players ratings and stats of FIFA 17 TOTY cards are usually boosted in six or seven points. The forwards evidently have less scope for an increase because Ronaldo and Messi are already highly rated. The attributes have a similar increase but it doesn’t mean that all attributes have to be improved. The position of the players in these cards may change if, in the previous year, they played really well in a new position.

Excepting the Pro Players and the Record Breaker cards, these ones are usually the most expensive cards of the whole FUT 17.

Who has chances to feature in the Team of the Year? Who are the favourites to feature in the FIFA 17 TOTY

Our community has voted in the favourites. Here are the results:


You can learn more about the community favourites here.

Who are the FIFA 17 TOTY players?

The official announcement was made on January 9th. These are the eleven TOTY players:

More details of this team can be found here. The behaviour of IF cards’ prices during the TOTY is slightly different. Although the lowest prices are also expected on January 9th, the truth is that the difference comparatively to the values registered immediately before the Black Friday is much smaller. After hitting a historical minimum on the first day of the Team of the Year, the price tendencies start being just one: increasing. During the whole week, day after day, the cards keep becoming more expensive, reaching a price increase of about 15% between the first and the last day. Just as the blue cards stop coming from packs, the IF cards’ price increase becomes even more evident. This behaviour is explained mainly by the anticipation of upgrades season which can make many IF cards gain value. If you’re waiting for the release of the Team of the Year to buy the regular card of a centre back or goalkeeper who is very likely to feature in the TOTY, don’t do so in the first days of the TOTY week. The reason why you shouldn’t is because just as the NIF cards stop coming from packs, they suffer an increase of more than 10%, something very considerable since we’re talking about a period of just two days. On the third day, when it’s once again possible to find these cards in packs, a very accentuated price drop is registered. Their minimum is hit on saturday, the same day increases of around 20% over the prices we had before the TOTY release are registered.

As for the midfielders who receive a TOTY card, their NIF cards’ prices are constantly slightly increasing from the day the TOTY is announced. This behaviour stays the same on wednesday and thursday, when you can’t find them in packs. Just as they go back to being available, there’s a slight drop, then follows an increase of about 15% in a single day (sunday), as a result of the anticipation of the end of the most important week of the season.

From the first and to the last day of the TOTY, the forwards TOTY prices are always increasing. Between the day of the TOTY announcement and the next saturday, these NIF cards’ prices increase about 10%. This increase gets even more accentuated starting from sunday, and dragging itself until tuesday, when the maximum is reached with an accumulated valorisation of almost 30%. If you’re thinking of buying a Ronaldo or a Messi, maybe it’s best to do so in the first week of january, before the TOTY is released.

The first blue cards to be released are the goalkeeper’s and the defenders’. Just like what happens to almost any IF card, they appear on the market at very high prices and after a few hours they can cost much less. As for these first cards we’re analysing, the devaluation in the first 24 hours can reach up to 40%. From tuesday to wednesday, the day when the market is already saturated with these cards, their prices reach their minimum, a drop of 5 to 10%, followed by a slight recovery until the weekend arrives.

Buying the TOTY card of a midfielder just as it’s launched is always a terrible idea. Only in the first 48 hours they tend to lose about 20% of their value. On the weekend prices slightly increase, but if you wait until the next week you can save almost 20%, which is a lot of coins for a card like that. The devaluation along the next six months goes on but in an extremely slow rhythm.

The most desired cards of the game have a friday 13th as release date but things will only go bad if you try to buy them in these four days in which they’re available in packs. Only in the first 24 hours it’s expected for them to lose up to 25% of value, while the most reputed the player is, the biggest the devaluation will be. Until the end of the TOTY, prices maintain themselves more or less stable, suffering a new devaluation on the next week when it can reach up to 20%.

FIFA 17 TOTY players are usually the most expensive ones because they are the ones with best stats. A blue Ronaldo or Messi card will cost you around 3 million coins while the lower rated TOTY players can cost you less than 300k coins.

You can find a deeper explanation about FIFA 17 TOTY prices, clicking here.

What you need to know about FIFA 17 TOTY Cards

Q: What is the difference between Team of the Year and Team of the Season?
A: TOTY is a team made by the players who played better during the calendar year, according to the FIFPro’s voting. The TOTS has nothing to do with the calendar year. It is about the players of each league who have played better during the season (usually between August/September and May) and they are not chosen by FIFPro members.

Q: Who chooses the players for the Team of the Year?
A: The TOTY players are selected from the voting of the International Federation of Professional Footballers (FIFPro), the world wide professional footballers association, and announced in the FIFA Ballon d’Or Gala. This representative organisation comprises of 65,000 pro footballers and is made up of 58 countries. It’s them who choose the best players of the year.

Q: How many players are selected for the TOTY?
A: Eleven. The Team of the Year is released only once a year and contain the best 11 players in the world, also known as the World XI. The TOTY is made up of 1 goalkeeper, 4 defenders, 3 midfielders and 3 forwards, where each category can contain a player in any position.

Q: When the TOTY will be announced?
A: The Team of the Year release date coincides with the Ballon d’Or 2016 gala in Zurich, where the players are announced. This year it will be on January 9, 2017 (Monday)

Q: In which FUT packs I can find FIFA 17 TOTY cards?
A: TOTY players can be found in any pack with rare gold players. Obviously, the chances of finding one of these cards are higher if you open a pack which contains more rare gold players cards.

Q: Can I store packs to open during the TOTY week?
A: Yes. It doesn’t matter when you got the packs. The cards you will find inside depend exclusively of the date you open them.

Q: Are FIFA 17 TOTY cards available in FUT Draft mode?
A: Yes, they are available in all modes, including FUT Draft and FUT Squad Building Challenges. Obviously, you can only find one of these blue cards after its release in January.