For all those players who plan to build a FIFA 18 Süper Lig squad, we’ve conducted an extensive analysis on the best players.

Here is our guide to the top Turkish league in FIFA 18 Ultimate Team.

All of these steps are necessary to have; or it could mean that the team is not always well built as it could be. This article aims to help those that want to form a FIFA 18 Süper Lig squad. Even the players that already have a team based in this league, could take out some valuable conclusions from this guide that could help you make your team even better.

✔️ Only Normal Players
In this guide, we didn’t consider players that have been transferred to other clubs or that have been reviewed (UP). Only players that started their season in the Turkish League and with their original attributes were considered.

✔️ Fluctuation of Prices
In the chapter where FIFA 18 Super Lig squads are suggested, we added a link where you can check anytime the updated prices.

The team suggestion that follows should serve merely as orientation because it’s impossible to build a team that fits everyone. It depends on various factors we don’t know such as budget, formation, style of play and player preferences.

Since the players of this league are all very cheap, it makes no sense to publish more than one squad. The difference between an unlimited budget squad and a low budget squad is just a few thousand coins. 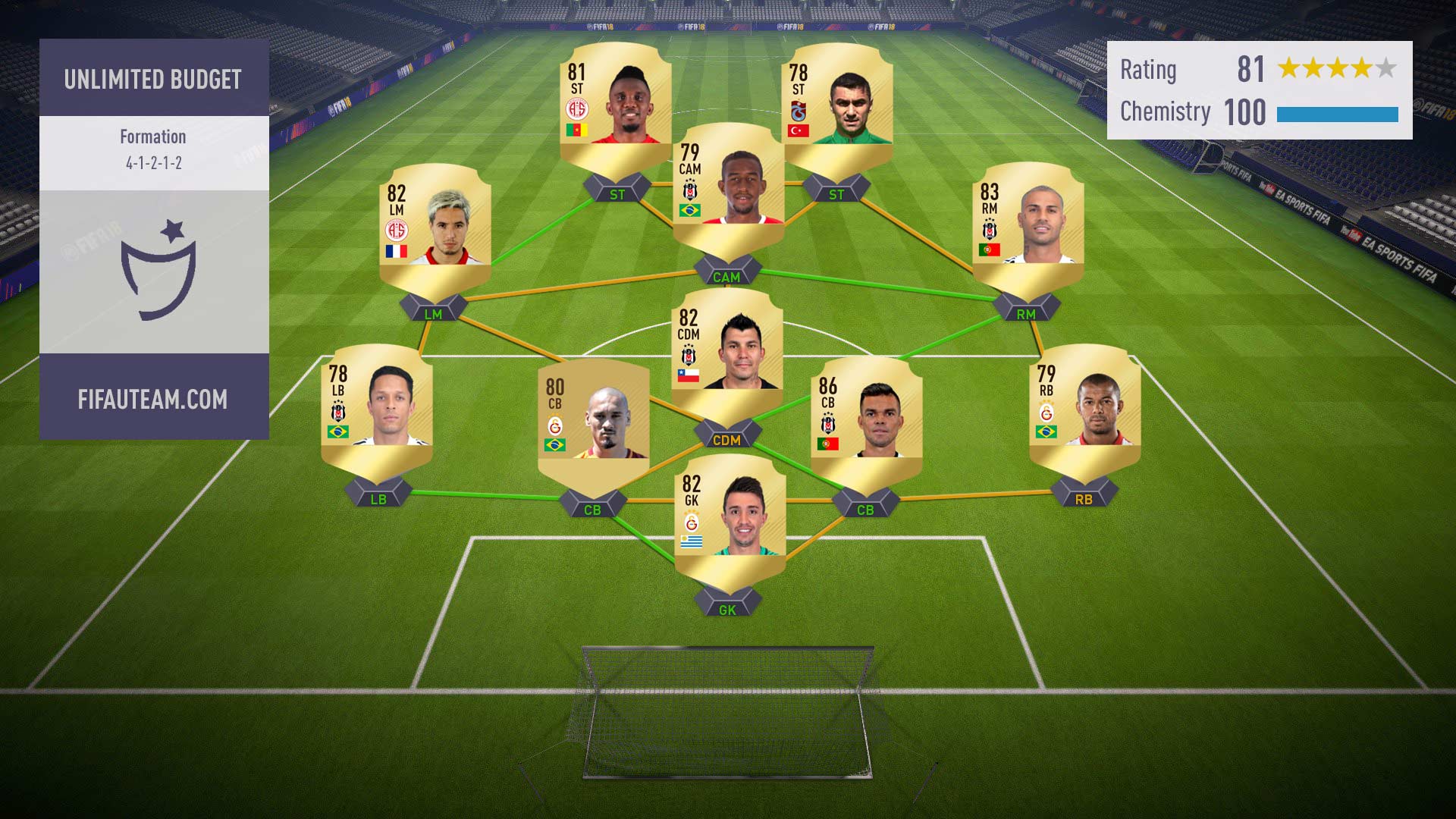 Muslera is, in our opinion, the best Süper Lig goalkeeper money can buy.

On the defence, Pepe is clearly the player you can’t miss. He is the fastest centre back and also the one with best defensive skills. Aurélien Chedjou is fast enough but he doesn’t have the minimum defensive and physical skills required to play in this position. That’s why we prefer Maicon or Škrtel. Mariano and Adriano are our choices to the right and left sides of the defence.

For the defensive midfielder position we picked Medel. He gives much more security to your back line than any other player. However, if you want someone more able to attack, we suggest Hutchinson. He has high/high work rates, an amazing stamina and balanced stats. In front of him, it’s not easy to choose between Talisca, Giuliano and Belhanda. There is also Özyakup and Kucka, but this last one should only be used as CM that helps the defence.

The choice of Quaresma for the right winger is pretty obvious. He is one of the best players in the Turkish league. If you have the freedom to spend a few more coins, try to complete the Süper Lig SBC in order to upgrade to his improved card. On the opposite side, Nasri is our favourite. If you are one of those players who needs very fast wingers, you can replace him by Elia.

Yılmaz and Eto’o are the best strikers playing in Turkey and have to be included in any Süper Lig squad with two strikers. Well, in fact it depends on your playstyle. Negredo, for example, is a decent choice if you like to cross to the head.