Who are the best FIFA 19 Serie A midfielders? Let’s find out good defensive, centre and attacking midfielders, as well as right and left wingers, to your team!

World’s Champion Matuidi is by far the most popular defensive midfielder.

De Rossi and Matuidi are the ones who defend better.

Again, Matuidi and De Rossi are among the best on this side.

Matuidi is undoubtedly the best player for this position. Serie A fans should be happy to see a player of this class playing in Italy. There is no other CDM as fast as he is which makes him even more special.

If you don’t have enough coins to buy him, you can try to sign the old good Daniele De Rossi or Marco Parolo. It’s in midfield that there’s more quality in the Serie A. Some of the world’s best footballers play there. It’s the case of Hamšík, Pjanić, Milinković-Savić and Nainggolan.

Even though Hamšík has a great passing stat, Miralem Pjanić is the one who does it better.

Once again, Miralem Pjanić is the centre midfielder with best dribbling stat in the Serie A.

Nainggolan is our favourite centre midfield from Serie A. He can play in any position of the midfield. He knows how to attack and how to defend. Who doesn’t like to play with high stamina and high/high work rates players? The only problem is his price. As alternative to him, if you want a CM to play as a CDM, we suggest you Allan. Khedira and Emre Can can also play that role.

In other hand, if you need someone more attacking, Sergej Milinkovic-Savic and Marek Hamšik are perfect. Pjanic has better passing and dribbling stats but he is not as good in the other attributes. No other CAM can be compared to Paulo Dybala in this league.

Valero is usually the CAM with best passing stat in Italy but this year he was caught on the top by Dybala.

In the world, only Messi, Neymar, Hazard and Isco have better dribbling stats than Dybala.

Dybala has no competition. He is the fastest CAM, the one with best passing and shot stats, and also the Serie A player with the best dribbling stat. The only question you may have is: in which position you will use him?

Try to avoid all other CAMs and pick a CM to play in this position. José Callejón and Juan Cuadrado are the most popular right wingers playing in the Serie A.

Keita Baldé is the fastest right winger in Italy.

There are a lot of players gifted in dribbling, being Cuadrado the best.

Suso is the right midfielder who has the best passing on this league.

Cuadrado should be your first option for this position if you are building a Serie A squad. He’s fast, has an amazing dribbling and he is a 5-stars skiller.

Most of the community uses José Callejón as alternative to Cuadrado but, in our opinion, Simone Verdi is better than him. And cheaper too… Lorenzo Insigne, Douglas Costa and Ivan Perišić are the three most popular left wingers playing in Serie A.

Serie A features lack of speed on the left side of the attack. Insigne is the exception.

Insigne and Douglas Costa are the two left wingers with the best dribbling stat.

Once again, it’s Insigne who is on the top.

In our opinion, only three players are good enough for this position: Douglas Costa, who is the fastest one; Perišić, who is not so fast but stronger; and Insigne, who is the most balanced from these three. We don’t recommend any other player, except for low budgets squads. 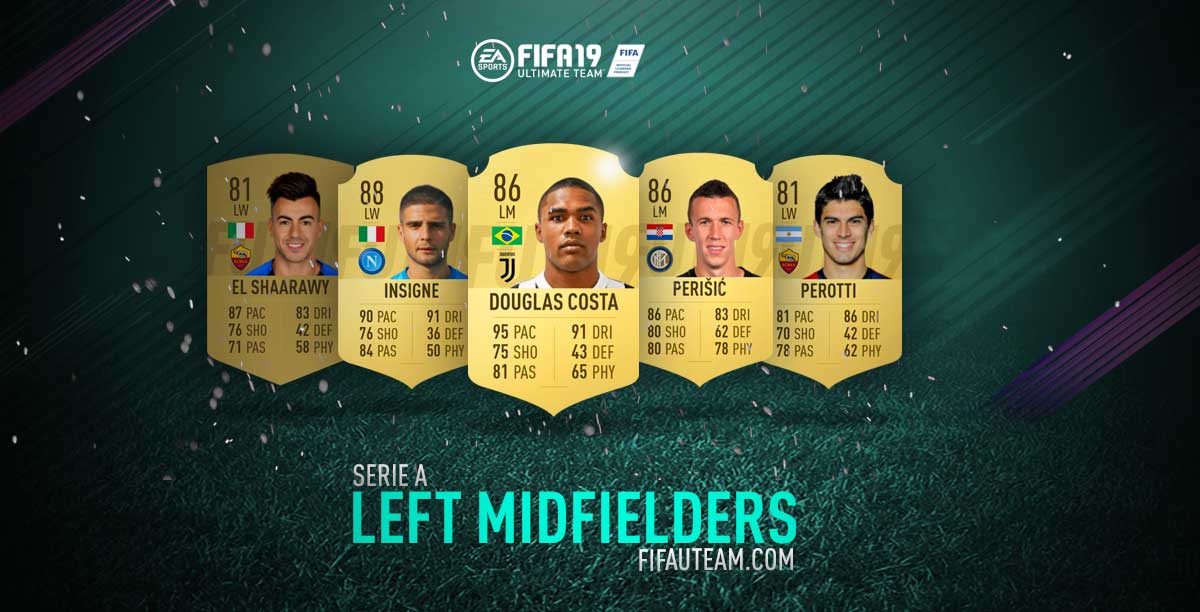