There are plenty of quality strikers and centre forwards on the Premier League but three of them are better than the other ones. Pierre-Emerick Aubameyang, the fastest player of this league, is also one of the favourites. He has everything a player needs to score loads of goals with his feet. If you play with two men on the front, you will have to choose between someone more dynamic, Son, or fixed on the box (Aguero). Our preference would normally go to the City’s striker but the downgrade in his pace made us change idea.

Surprisingly (or not), we recommend trying Rashford to those who don’t have enough coins to buy one of the top three. More than his 5-star skills (probably you don’t need more than 3 stars), it’s his pace that makes the difference. Lacazette and Firmino are not as good as he is.

If your definition of a striker is a player on the box waiting to score, then you will probably like Kane. He has the best shooting and one of the best heading stats. Zaha, Lucas and Vardy are cheaper choices for who needs pace, leaving Gabriel Jesus out of this top.
01 87 🇰🇷 Heung Min Son
02 88 🇬🇦 Pierre-Emerick Aubameyang
03 89 🇦🇷 Sergio Agüero
04 83 🏴󠁧󠁢󠁥󠁮󠁧󠁿 Marcus Rashford
05 86 🇫🇷 Alexandre Lacazette
06 86 🇧🇷 Roberto Firmino
07 89 🏴󠁧󠁢󠁥󠁮󠁧󠁿 Harry Kane
08 83 🇨🇮 Wilfried Zaha
09 83 🇧🇷 Lucas Moura
10 82 🏴󠁧󠁢󠁥󠁮󠁧󠁿 Jamie Vardy 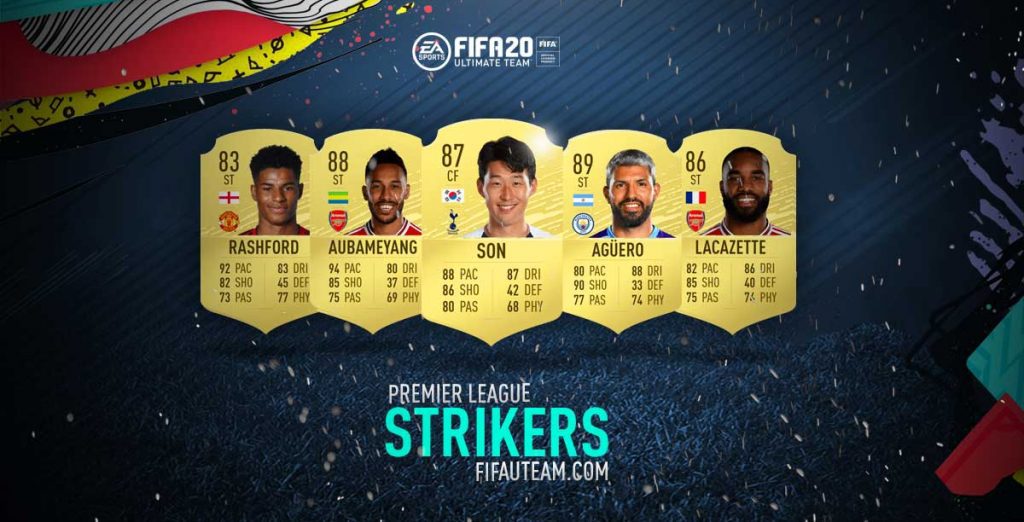