FIFA 21 Dynamic Tactics allows you to create different game plans to use in different moments of the game. Learn what they are and how to set up them.

Introduction to the Dynamic Tactics

If you’ve ever wanted more control over your FIFA team’s tactics and the ability to dive into the gritty tactical details that your favourite real-world managers deal with every week, you’ll need to make use of Dynamic Tactics. This feature provides deeper, more advanced control over your team’s tactics both before and during matches. See all of your changes and adjustments, no matter how small, executed by your players on the pitch as you play.

This system gives players the tools to set multiple tactical approaches, offering in-depth customization pre-match, as well as more options for dynamic in-match adjustments simply from the D-Pad. Each tactical approach combines formations, mentalities, and both attacking and defensive play styles, enabling you to easily customize your play to any situation.

With Dynamic Tactics you can also create multiple game plans that you can switch between during a match. Every option that you have when creating your pre-match plan can be assigned to one of your custom game plans, so you aren’t constantly going to the pause menu when you need your team to play differently. Dynamic Tactics also allows for deeper tactical customization, using a range of sliders to tweak the various aspects of your offensive and defensive approaches. Your custom game plans are mapped to the D-Pad (on consoles), so that you can quickly change between them during matches. 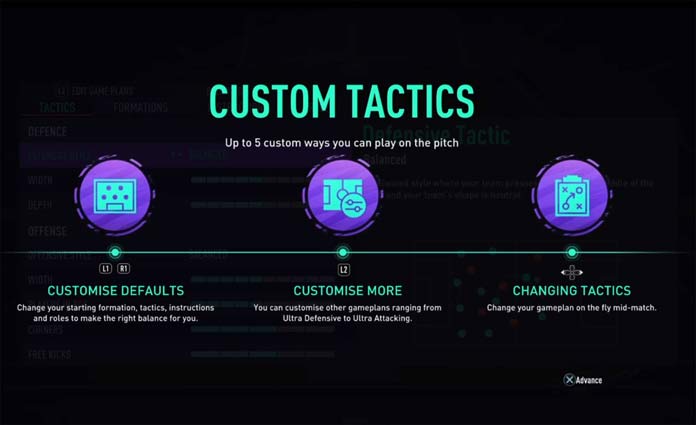 Even though tactics have been a big part of the FIFA franchise for a long time, Dynamic Tactics has overhauled the entire system to make setting up your team more important than ever. Your team will execute your approach in an obvious manner so that you can get a visual idea of how it’s working on the pitch. For example, if you choose a possession-based tactic, your players will support their teammate in the possession and provide safe passing options. If you adjust for faster build-up play, your players will move quickly up the field and make riskier runs to try and create immediate chances. Any player can use this to their advantage—tactics have been balanced perfectly so that every approach has an effective counter-tactic. If you can identify what your opponent is using, you can respond quickly during a match by changing your own tactics.

Whether you’re looking to get more control over your team’s tactics, prepare a game plan for any situation, or seamlessly tweak things during a match, you’ll get something useful out of the FIFA 21 Dynamic Tactics.

It’s easy to customize game plans but we will guide you step by step anyway.

1 Go to the Team Management Screen
To start setting up a game plan, you need to go to the screen where you control your squad, select ‘Squad Actions’ and then ‘Custom Tactics’.

2 Press L2/LT
From the custom tactics screen, you can make any change you want for the upcoming match but you can also press L2 (PlayStation), LT (Xbox) or W (PC) and edit the four-game plans available: Ultra Defensive, Defensive, Attacking and Ultra Attacking. 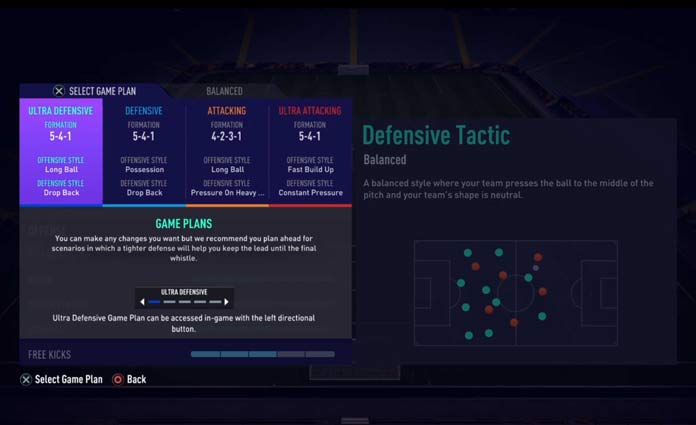 3 Move Right and Press X/A
Select the game plan you want to edit and press X (PlayStation) or Z (Xbox). You can edit one plan at a time. Their names were created to make your job easier but you can, for example, give an attacking style to an ultra-defensive plan. It’s up to you. It’s not possible to edit game plan names. 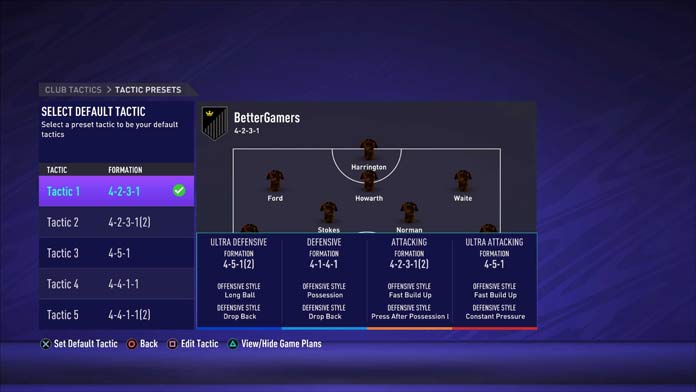 4 Edit your Tactics
After you confirm the game plan you want to edit, you can make all the changes you want on your tactics. You can know more about it clicking here. 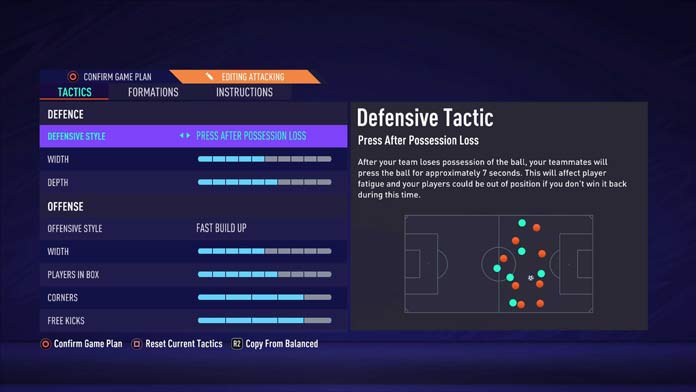 5 Edit your Formation
After editing the tactics, press L1 (PlayStation) or LT (Xbox) and choose a new formation (obviously, you can keep with the default one). 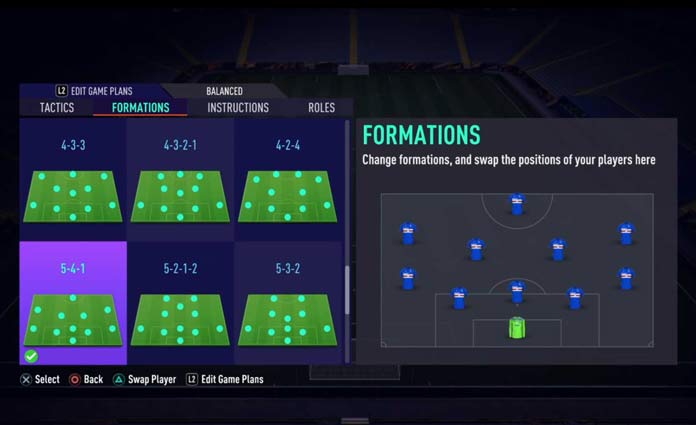 6 Edit your Instructions
After editing the formation, press L1 (PlayStation) ot LT (Xbox) again and set up the player’s instructions. You can know more about it clicking here. 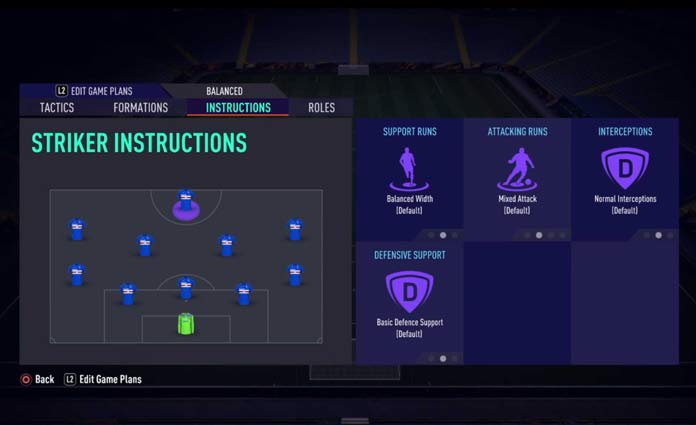 7 Edit your Roles
After editing the instructions, press L1 (PlayStation) or LT (Xbox) again and set up the player’s roles. You can know more about it clicking here. It is not possible to edit roles in all game modes, the same way you cannot edit your squad in Ultimate Team. In other modes, you can set a game plan to swap your players and adjust their position on the field. 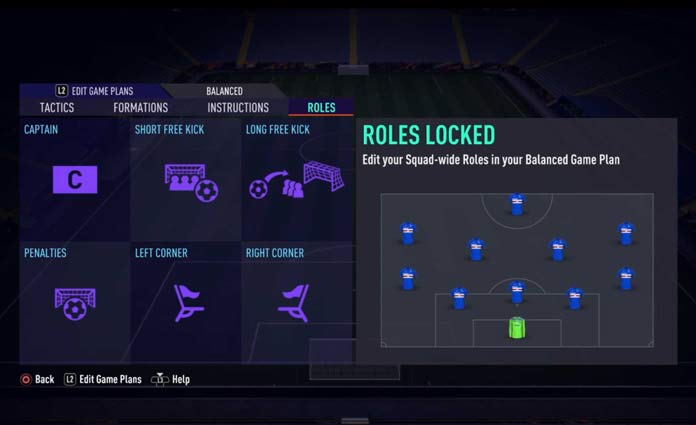 8 Press Circle/B
When you feel happy with the game plan you set, press Circle (PlayStation) or B (Xbox) to save that configuration.


9 Set Up Other Game Plans
If you want, you can repeat the process from step 2 to step 8 to customize up to four game plans or to edit again a game plan you already have set up.


10 Use the D-Pad
You can access the plans in-game with the directional button. Moving left you go to Ultra Defensive (twice) and Defensive, whilst moving it right you go to Attacking and Ultra Attacking (twice).