MORE ICONS
REAL LIFE
BIOGRAPHY
Edwin van der Sar (born 29 October 1970) is a retired Dutch goalkeeper regarded as one of the best keepers of all time. A double winner of European silverware and winner of eight league titles with Ajax (4) and Manchester United (4), van der Sar holds the world record for consecutive clean sheets which he set in 2009 by going 1,311 minutes unbeaten.

He is the Netherlands’ most capped player with 130 caps, and the only player to receive the Dutch Football Goalkeeper of the Year award over four consecutive seasons.
PERSONAL INFORMATION
Full name
Edwin van der Sar Edwin van der Sar started his career at a relatively late age, brought in by Ajax as a second-choice goalkeeper. Honing his abilities in the reserves, he bided his time before breaking into the first team as part of the golden generation which dominated domestic football in the mid-1990s.

The crowning glory for this great side came in the form of 1995 Champions League glory, as the Dutchman kept a clean sheet in a 1-0 win against Milan. After a transfer tussle with Manchester United, Edwin van der Sar joined Juventus in 1999, and became their first-choice goalkeeper for the two years he spent at the club.

Remarkably, the Dutchman became the first ever non-Italian to play between the sticks for the Turin club. The Old Lady were pipped to the Serie A title in both those seasons, finishing second, but they did hold the best defensive record in the league each year. By now seen as the complete model goalkeeper, age was just a number as Edwin van der Sar signed for Manchester United to solve their longstanding problem position.

His 6-year stay was characterised by clean sheets (not least during a league record spell without conceding) and silverware, including four Premier League winner medals. The iconic moment of his time in Manchester came in the 2007-08 Champions League final against Chelsea, as his penalty save in the shootout won the cup for United. 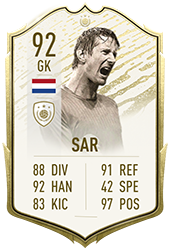