PLAYER INFO
SHORT BIOGRAPHY
A large, physically strong, hard-working, and tenacious forward who combined technical skill and creativity with power and goalscoring ability, Cantona is often regarded as having played a key role in the revival of Manchester United as a footballing force in the 1990s and having an iconic status at the club. He wore the No. 7 shirt at Manchester United, and is known for turning up his collar.

Cantona is affectionately nicknamed by Manchester United fans as “King Eric”. Set against his achievements in football was a poor disciplinary record for much of his career, including a 1995 conviction for an assault on an abusive spectator for which he received an eight-month suspension.
IN-GAME MEDIA CLICK TO SEE HIGH RESOLUTION 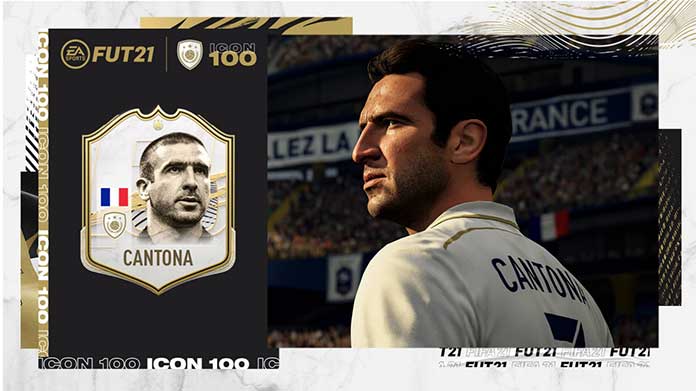 IRL MEDIA IMAGES AND VIDEOS OF THE PLAYER

BASE
RELEASE DATES
STATS
1990
Eric Cantona signed for his boyhood club Marseille at the age of 22 for a French then-record fee, the same year he won the UEFA European Under-21 Championship. He spent 18 months on loan at Bordeaux and Montpellier, winning the 1989–90 Coupe de France with Montpellier in which he played a crucial role by scoring a hat-trick en-route to the final. He subsequently returned to Marseille where he won the 1990–91 French Division 1 in what would be his final season for the club.

MID
RELEASE DATES
STATS
1996
Eric Cantona continued to make history in 1995-96 as he became the first non-British FA Cup winning captain after scoring the late winner against Liverpool with a trademark volley. His 14 league goals also helped his side secure further silverware as United won the Premier League. 1996-97 saw Cantona win his 5th English league title and finish as the league’s top assist provider, a credit to his outstanding overall game. He retired in 1997 at the age of 30 as a champion at the top of his game.