MORE ICONS
REAL LIFE
BIOGRAPHY
Eusébio da Silva Ferreira (25 January 1942 – 2 January 2014) is considered as one of the greatest footballers of all time. During his professional career, he scored 733 goals in 745 matches.

Nicknamed the Black Panther, he was known for his speed, technique, athleticism and his ferocious right-footed shot, making him a prolific goalscorer. Eusébio helped Portugal reach third place at the 1966 World Cup, being the top goalscorer of the tournament with nine goals. Shortly after Eusébio’s death, Alfredo Di Stéfano stated: “For me Eusébio will always be the best player of all time”.
PERSONAL INFORMATION
Full name
Eusébio da Silva Ferreira 1961
Eusébio made his debut for Benfica in 1960-61 but it was the following season that he made his breakthrough. With his remarkable dribbling ability and clinical nature in front of goal, he quickly gained global recognition for his abilities. Despite being in to his thirties, Eusébio was still one of the top strikers in European football. He proved this in the 1972-73 season when he scored 40 league goals as Benfica went unbeaten to win a third consecutive title.

It was even more memorable for Eusébio as it was his tenth domestic league title. His remarkable campaign saw Eusébio earn the 1973 European Golden Boot award. He was also named Portuguese Player of the Year for the second time in his career. After winning the 1965 Ballon d’Or, Eusébio was a household name as one of the most clinical strikers in world football. In the summer of 1966, he featured in his only FIFA World Cup™ where he scored nine goals in seven matches, helping Portugal to the semi-finals.

His final goal came in the third-place match against the Soviet Union, which Portugal won 2-1. Eusébio’s nine goals were enough to claim the Golden Boot as the tournament’s top scorer. 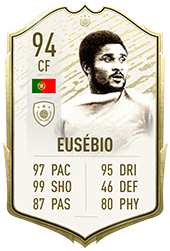