MORE ICONS
REAL LIFE
BIOGRAPHY
Fabio Cannavaro (born 13 September 1973 in Naples) is widely regarded as being one of the greatest defenders of his generation. His career highlight came in 2006 as Cannavaro famously captained his country to World Cup glory with incredible displays which saw him nicknamed “The Berlin Wall”.

A winner of both the Ballon d’Or and FIFA World Player of the Year in 2006, he went on to become Italy’s most capped player with 136 appearances for his country. After a successful club career which saw him win honours at both Parma and Real Madrid, he retired from the game in 2011.
PERSONAL INFORMATION
Full name
Fabio Cannavaro Fabio Cannavaro joined Parma from Napoli in 1995 and quickly established himself as a first team regular. His first trophy success came in the 1998-99 season, defeating Fiorentina on away goals to win the Coppa Italia. Further success for Cannavaro came shortly after, as he lifted the only European club trophy of his career – the 1999 UEFA Cup following a 3-0 win over Marseille.

Cannavaro would get his hands on a third trophy in 1999, as Parma defeated Milan for the Supercoppa Italiana. In the summer of 2006, Fabio Cannavaro joined Real Madrid following his FIFA World Cup™ success with Italy. In his first season with Los Blancos, Cannavaro made 32 appearances as he helped Real Madrid secure their first LaLiga title in four years.

He enjoyed further success in the 2007-08 season as Real Madrid retained their LaLiga trophy and added the Spanish Super Cup with victory over Valencia. Cannavaro was named in the FIFPro World XI for 2006 and 2007 during his time in Madrid. In 2006, following a strong season at domestic level, Fabio Cannavaro was named as captain in Marcello Lippi’s Italy squad for the 2006 FIFA World Cup™, having taken over the captaincy from Paolo Maldini in 2002.

Cannavaro showed his experience and composure as Italy lifted the World Cup having conceded just 2 goals and keeping a record 5 clean-sheets. His year ended with individual accolades, which included the Ballon d’Or and being named FIFA World Player of the Year for 2006. 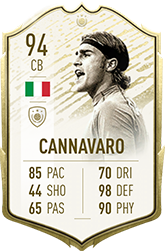