MORE ICONS
REAL LIFE
BIOGRAPHY
Lev Ivanovich Yashin (born 22 October 1929) is Aarguably the greatest goalkeeper in the history of the game. The “Black Spider” remains a Dynamo Moscow icon, the club where he spent his entire 20 year career.

Estimated to have kept 270 clean sheets and saved over 150 penalties, Yashin remains the only keeper to ever win the Ballon d’Or.
PERSONAL INFORMATION
Full name
Lev Ivanovich Yashin Despite a couple of appearances in 1950, Lev Yashin’s proper breakthrough at Dynamo Moscow came in the mid-1950s where he won back to back league titles. From here he would propel himself into one of the game’s biggest stars and arguably the greatest goalkeeper in the history of the game.

The mid 50s also saw Yashin earn a Gold Medal at the 1956 Olympic Games where he starred for the Soviet Union. Thanks to him playing all in black, Yashin was quickly dubbed the ‘Black Spider’ throughout the world. One of the greatest goalkeepers in history, Lev Yashin, revolutionised the modern game by tactically utilizing defenders when in possession. The start of the 1960s gave Yashin his greatest moment on the international stage – by winning the 1960 European Championships with the Soviet Union.

Regarded as a penalty saving expert, Yashin is attributed to have saved over 150 in his 20-year career – more than any other professional goalkeeper in history. Lev Yashin revolutionised modern goalkeeping and enjoyed an incredibly successful career with his club team Dynamo Moscow and at international level with the Soviet Union. Known as the ‘Black Spider’ for dressing all in black, Yashin was also an expert penalty saver.

His career highlight came in 1963 when Yashin became the only goalkeeper in history to win the coveted Ballon d’Or award and also claimed his 5th league title with Dynamo Moscow. 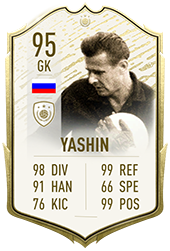