MORE ICONS
REAL LIFE
BIOGRAPHY
Luís Figo (born 4 November 1972 in Lisbon) was a Portuguese attacking midfielder and remains the country’s record cap holder with 127 appearances. After beginning his career at Sporting CP, Figo made the move to Spain and Barcelona where he won numerous domestic and European honors which culminated in winning the Ballon d’Or in December 2000.

After a controversial move to rivals Real Madrid for a then world record fee of £37 million, Figo’s incredible success continued before he ended his career in Italy at Internazionale where he won four consecutive Serie A titles.
PERSONAL INFORMATION
Full name
Luís Filipe Madeira Caeiro Figo In 2005, Luís Figo moved to Italian giants Internazionale. Although his time at Inter came in the later stages of his career, Figo’s impact cannot be understated. During his time in Milan, Inter won the Serie A title in all four seasons.

The 2006-07 season was undoubtedly the highlight for Figo, as his impact helped the club to a record-breaking 17 game winning streak. They ended the season on 97 points with just the one defeat during a dominant campaign. 1997Luís Figo’s career began to take off after joining Barcelona in the mid-1990s. Figo was a key part of the Barcelona team during his five seasons at the club, and he was integral as they enjoyed several trophy successes. Luís Figo heralded the start of the ‘Galáctico’ era at Real Madrid when he joined for a world record fee in July 2000. Figo’s arrival paid instant dividends, helping Real to the LaLiga title that season, along with the Spanish Super Cup. 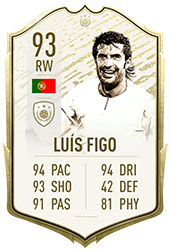