MORE ICONS
REAL LIFE
BIOGRAPHY
Michael Ballack (born 26 September 1976) is a retired German footballer who is among the top goal scorers in the history of the German national team. He was known for his passing range, powerful shot, physical strength and commanding presence in midfield. Internationally, Ballack has played in the UEFA European Football Championship in 2000, 2004 and 2008, and the FIFA World Cup in 2002 and 2006.

Jürgen Klinsmann appointed him captain of the national team in 2004. Ballack scored consecutive game-winning goals in the quarter-final and semi-final to help his country to the 2002 World Cup final, and led his team to the semi-finals of the 2006 World Cup and the Euro 2008 final.
PERSONAL INFORMATION
Full name
Michael Ballack Finally fulfilling his wish to play abroad, Michael Ballack signed for Chelsea in 2006. The box-to-box midfielder established himself as a reliable presence in The Blues starting eleven alongside the likes of world-class team mates Frank Lampard and Claude Makélélé.

During his spell in London, Ballack scored some vital goals for the club, particularly in the 2007-08 season, and left having won the Premier League title, as well as two FA Cups, the EFL Cup and the FA Community Shield. Michael Ballack’s spell at Bayern Munich saw him win three domestic doubles and twice win the German Footballer of the Year award, making it the most successful period of his career. The central midfielder also captained Germany in five games during their home FIFA World Cup™ campaign in 2006.

Ballack’s energy and passionate, gritty displays throughout the tournament was one of the key reasons as to why the 2006 tournament is fondly remembered by German football fans as a “Sommermärchen”. Michael Ballack’s impressive abilities going forward peaked in the most clinical season of his career in 2001-02. He scored a total of 23 goals in all competitions, guiding Bayer Leverkusen to the DFB-Pokal and UEFA Champions League finals, and a second-place finish in the Bundesliga.

The outstanding form of the box-to-box midfielder earned him the award of German Footballer of the Year in 2002, as well as a transfer to Bayern Munich at the end of the season. 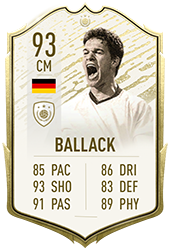