MORE ICONS
REAL LIFE
BIOGRAPHY
“The King of Football” Pelé (born on 23 October 1940 in Três Corações) was a winner of 40 club medals and countless individual accolades. Pelé is also the only footballer in history to have won three World Cup winners medals.

With a ratio of just under 1 goal every game, Pelé ended his career with the unbelievable goal scoring record of 1282 goals in 1366 career appearances. Pelé still holds the world record for the number of league goals scored, and is widely accepted as the world’s greatest footballer ever.
PERSONAL INFORMATION
Full Name
Edson Arantes do Nascimento In September 1956, Pelé burst onto the scene as a 15-year-old, scoring on his professional debut in an exhibition match for Santos. In 1957, at just 16, he finished his first season as the league’s top scorer.

His first trophy came when Santos lifted the Campeonato Paulista in 1958, with Pelé scoring a record 58 goals – a record that still stands today. Pelé carried his fine form in to the 1958 FIFA World Cup™, where his 6 goals helped Brazil to become champions for the first time. In 1962, Pelé led Santos to the most successful season in the club’s history. As well as retaining the Campeonato Paulista and Campeonato Brasileiro, Pelé’s 4 goals also helped the club to secure their first Copa Libertadores to complete an impressive continental treble.

Santos also secured the Intercontinental Cup thanks to one of Pelé’s finest performances, scoring a hat-trick in the second leg against Benfica. Pelé also lifted the 1962 FIFA World Cup™ with Brazil in an unforgettable year. A 28-year-old Pelé helped Santos to secure a third consecutive Campeonato Paulista in 1969. Just 5 months later Pelé scored a penalty that became popularly known as O Milésimo – his 1,000th goal in all competitions – to mark a monumental personal milestone.

The following summer Pelé was a key member of the Brazil side that went on to win the 1970 FIFA World Cup™ with a perfect record of 6 wins, scoring 4 goals; including the opening goal in a 4-1 win over Italy in the final. 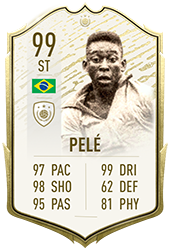