MORE ICONS
REAL LIFE
BIOGRAPHY
Raúl González (27 June 1977) is considered one of the most important players in the history of Real Madrid and regarded as one of the greatest Spanish players of all-time. He spent 16 years of his career playing for this club and is the club’s second all-time top goalscorer with 323 goals.

Although he did not win any major competitions while playing for the Spain national team, he scored a then-record 44 goals in 102 appearances for la Roja, appearing in three FIFA World Cups and two European championships.
PERSONAL INFORMATION
Full name
Raúl González Blanco In 2010, Raúl moved to Schalke 04 after spending 16 years at Real Madrid, bringing his remarkable time at the Bernabéu to an end. After a quiet start to life at Schalke, Raúl proved he still possessed magnificent goal-scoring ability by scoring 19 goals in his first season, including two hattricks. In the DFB-Pokal semi-final he scored a key goal to beat Bayern 0-1.
Raúl and Schalke finished the season by lifting the DFB-Pokal, his first ever domestic cup title, and beating Dortmund in the German Super Cup.
MID At the age of 17, Raúl made his debut for Real Madrid in October 1994. Rapidly, he became a sensation in Spain, contributing 9 goals in his first season to help Real win LaLiga in 1994-95. He lifted his second league trophy with them in 1996-97, scoring 21 goals.

A natural goal-scorer, Raúl was crowned Spanish Footballer of the Year in 1997, and he won the UEFA Champions League and Spanish Super Cup the following season. Raúl had become Real Madrid’s new star and would change the club forever. His elegant trademark chip, intelligence and superiority in the box made him unlike any other striker. As he rose to iconic status, he was named Spanish Footballer of the Year for the fifth time in 2002. 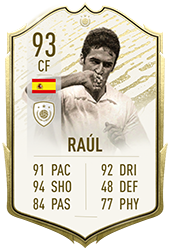