MORE ICONS
REAL LIFE
BIOGRAPHY
Roberto Carlos was born on 10 April 1973 in São Paulo Brazil, and is regarded as one of the greatest left backs in history. Carlos enjoyed his greatest club success at Real Madrid, where between 1996 and 2007 he helped them to many domestic and European trophies. Roberto Carlos joined Palmeiras in 1993, as head coach Vanderlei Luxemburgo looked to build a team to win their first Campeonato Brasileiro since 1976. Roberto would go on to make 20 league appearances as Palmeiras achieved their goal, before repeating the feat the following year to retain their title in 1994.

During his time at Palmeiras, Roberto lifted 5 trophies; his performances caught the eye of European sides and Roberto joined Inter Milan in 1995. In 1997, Roberto scored one of the greatest free-kicks of all time with a memorable strike against France. With the ball looking set to fly well wide of the goal, it took a sudden sharp turn to the left and crept inside the post.

The following year Carlos helped Real Madrid to lift their first Champions League trophy in 22 years, with his shot deflecting to the feet of Predrag Mijatović for the game’s only goal. Carlos finished the summer as a runner-up with Brazil at the 1998 FIFA World Cup™. Roberto enjoyed double success in the summer of 2002, both on the domestic and international stage. The first triumph came as ‘El Hombre Bala’ assisted both goals as Real Madrid beat Leverkusen 2-1 in the Champions League final.

Later that summer, Roberto would help Brazil to go one step further than they had 4 years earlier, as they lifted the 2002 FIFA World Cup™. His performances throughout 2002 led to a Ballon d’Or nomination, finishing runner-up, and a place in the UEFA Team of the Year. 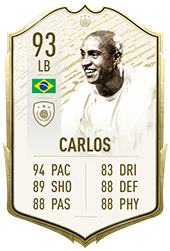