MORE ICONS
REAL LIFE
BIOGRAPHY
Ronaldo de Assis Moreira (born 21 March 1980) was one of the last true bohemians of football. He personifies what Jogo Bonito is all about. With endless creativity and superb technique, the Brazilian attacking midfielder was equally capable to score a beautiful goal or to serve the perfect pass for his teammates to shine.

Ronaldinho won the biggest trophies in the world and he did so while playing beautifully and with a smile on his face.
PERSONAL INFORMATION
Full name
Ronaldo de Assis Moreira Ronaldinho joined Milan in 2008. His first goal for the club came in a 1-0 win over rivals Internazionale before helping Milan back into the Champions League after a one year absence.

Following a change in position to a more familiar left-wing role, Ronaldinho hit top form in 2009-10 and finished as the Serie A assist leader with 14, as well as scoring 12 goals. His sole piece of silverware came in his final season with the club, as Milan secured the Serie A title in 2010-11. Ronaldinho joined Paris Saint-Germain in the summer of 2001. He found his best form and goal-scoring ability in the lead up to the 2002 FIFA World Cup™. His personal highlight in the competition came in the quarter-final tie with England.

After assisting Rivaldo for the equaliser, Ronaldinho scored an audacious free-kick when he chipped the ball over David Seaman from 40 yards. Ronaldinho and Brazil would lift the trophy following a 2-0 win over Germany in the final. In 2003, Ronaldinho joined Barcelona. He enjoyed a fruitful first season, but it was in his second season where the success came.

Regarded as one of the most skillful players of his generation, and with an entertaining style of play and a productive return, Ronaldinho was named FIFA World Player of the Year for 2004 before leading Barcelona to a La Liga triumph in 2005. He also lifted the Spanish Super Cup, scoring in a 3-0 win over Real Betis, before winning the Ballon d’Or that same year. 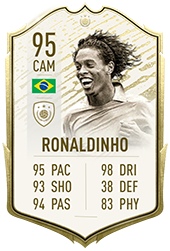