MORE ICONS
REAL LIFE
BIOGRAPHY
Roy Keane (born 10 August 1971) is a retired Irish midfielder. Renowned for his no-nonsense, tough tackling style, Keane was best known for his pivotal role as captain of Manchester United during their domination of English football in the 1990’s and 2000’s.

Keane began his career in Ireland at Cobh Ramblers before moving across the waters to Nottingham Forest. After three highly successful years at Forest, which included a Full Members Cup trophy, United paid a then record British transfer fee of £3.75m for his services, and he would go on to help them lift 7 Premier League titles.
PERSONAL INFORMATION
Full name
Roy Maurice Keane Before the start of the 2002-03 season, following a hip operation, Roy Keane adapted his playing style in a bid to avoid further injuries. Despite this, he was as inspiring as ever in the heart of Manchester United’s team, guiding them to yet another Premier League title.

He finished his United career soon after with 50 goals and 17 trophies. His fine performances for them over the years saw him placed in the English Football Hall of Fame in 2004. After starting out at Cobh Ramblers in the Republic of Ireland, Roy Keane moved to Nottingham Forest before sealing a transfer to Manchester United for a British record fee before the 1993-94 season.

On arrival, he slotted into central-midfield alongside Paul Ince, replacing the legendary Bryan Robson. He helped United retain their Premier League title, leading the table from the fourth game onwards. The club also won the FA Cup in Keane’s debut season, their first-ever double. In the 1998-99 season, he led his side to a historic treble of the Premier League, FA Cup and Champions League. His performance against Juventus in the semi-final of the Champions League is often regarded as the finest hour in his illustrious footballing career. 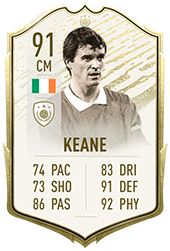