MORE ICONS
REAL LIFE
BIOGRAPHY
Sol Campbell (born 18 September 1974 in Plaistow) is a retired English defender. Campbell started his career at Tottenham Hotspur and during his time there went on to become one of the greatest English defenders of his generation.

In his quest for silverware, Campbell made the move across North London to Arsenal, where he became a part of their famous ‘Invincibles’ side, winning two Premier League titles and three FA Cup winners medals. Campbell’s International career saw him appear 73 times for England and become the only player English player to appear in six consecutive major tournaments.
PERSONAL INFORMATION
Full name
Sulzeer Jeremiah Campbell Sol Campbell made his Tottenham Hotspur debut in 1992. Known for his strength, pace and composure on the ball, Campbell established himself at the heart of the club’s defence in the following years. <br<
His impressive performances throughout the 1995-96 season earned Campbell a first England cap in May of 1996. Following Gary Mabbutt’s retirement in 1998, Campbell took over the captaincy before leading Spurs to the League Cup final in 1999, lifting his one and only trophy with the club.
MID In the summer of 2001, Sol Campbell made the short move across North London when he swapped Tottenham Hotspur for Arsenal. He made his debut in the 2001-02 opener at Middlesbrough and made 31 league appearances throughout the season, scoring 2 goals.

Campbell’s first campaign at the club brought instant success as Arsenal lifted the Premier League and FA Cup trophies to claim a domestic double. He also earned a personal accolade in 2002 when he was named in the FIFA World Cup™ All-Star team. After being named in the 2002-03 PFA Team of the Season, Sol Campbell extended his fine form into the following season. The 2003-04 campaign became one to live long in the memory as Campbell’s powerful performances in defence helped Arsenal to finish the season unbeaten and lift the Premier League trophy.

In doing so, the Gunners became the first top-flight side to go unbeaten in England since the 1880s, leading to that season’s squad to be labelled “The Invincibles”. 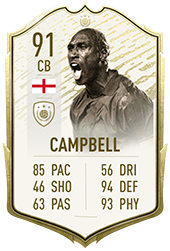