MORE ICONS
REAL LIFE
BIOGRAPHY
Steven Gerrard (born 30 May 1980 in Whiston) spent the majority of his playing career as a central midfielder for Liverpool, with most of that time spent as club captain, as well as captaining the England national team.

A versatile and well-rounded player, highly regarded for his leadership, Gerrard is the only footballer in history to score in an FA Cup Final, a League Cup Final, a UEFA Cup Final and a UEFA Champions League Final, winning on each occasion.
PERSONAL INFORMATION
Full name
Steven George Gerrard Despite being into his thirties, Steven Gerrard’s influence on the Liverpool team was still high heading into the 2013-14 season. After surprisingly leading the Premier League heading into the final few games, Gerrard and Liverpool eventually missed out on the title in the cruellest of circumstances, despite Gerrard scoring 13 league goals and providing 13 assists – the highest in the league.

Gerrard went on to play one last season with Liverpool before moving to LA Galaxy in the MLS. By the turn of the century, Steven Gerrard had cemented his place in the heart of the Liverpool midfield. In the 2000-01 season, Gerrard collected his first silverware in style. After winning the EFL Cup on penalties, Gerrard and Liverpool followed this by defeating Arsenal in the FA Cup final.

To complete a cup treble, Liverpool then faced Deportivo Alavés in the UEFA Cup final, where they triumphed 5-4 after extra time, with Gerrard notching the second goal of the game. Steven Gerrard enjoyed the greatest moment of his footballing career in an extraordinary fashion during the mid-2000s. Trailing 3-0 to AC Milan in the 2005 UEFA Champions League final in Istanbul, Gerrard scored the first goal to inspire his side to a dramatic second-half comeback as they got back on level terms at 3-3 in a 6-minute spell.

Eventually, Liverpool won the tie on a penalty shootout, and the UEFA Champions League title, with Gerrard named Man of the Match. 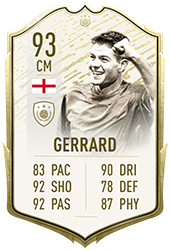