BE THE NEXT GENERATION

FIFA 22 Be The Next Generation is a marketing campaign that includes a free Special Item for all of those who play FIFA 22 before January 14.

BE THE NEXT GENERATION RELEASE DATES

The Be the Next Generation event is being released for the first ever in FIFA 22.
Release dates for FIFA 22 are estimated.
All release times are indicated in the UK time zone.
FIFA 22
FIFA 22

FIFA 22 BE THE NEXT GENERATION OFFERS

This calendar lists all FIFA 22 Be the Next Generation offers.

FIFA 22 Be the Next Generation FAQ section.
1
2
3
4
5
6
7
8
9
10
1
Q: What are Next Generation items?
A: Next Generation items are special cards which cannot be found in the transfer market, objectives or squad building challenges. They are given for free to those who played FIFA 22 at least once until January 14, 2022.
2
Q: Does everyone in FIFA 22 get one of these cards?
A: Yes, as long as you’ve played FIFA 22 on PlayStation 4, PlayStation 5, Xbox One, Xbox Series X|S, Stadia, or PC via Origin and Steam at any point between launch and before January 14, 2022 you’ll be gifted one of these items.
3
Q: What is the ‘Be the Next Generation’?
A: It’s a marketing campaign that includes a free special item offer for all of those who played FIFA 22 at least once before January 14, 2022.
4
Q: How many players will I receive?
A: One random player from the announced six. The Next Generation Player Item will contain one item out of the six Special Next Generation Player Items that celebrate Kylian Mbappé, Eduardo Camavinga, Phil Foden, Jude Bellingham, Théo Hernandez, and Christian Pulisic’s status as up and coming stars in the world of football. Their items celebrate a defining moment from their careers to date which brought their talent to the world’s attention.
5
Q: When will I recieve the Next Generation pack?
A: Starting December 15, 2021.
6
Q: What happens if I upgrade to a next generation console?
A: If you upgrade from PlayStation 4 to PlayStation 5, or Xbox One to Xbox Series X|S, you’ll be able to carry over your progress in FIFA Ultimate Team – including your Next Generation Player Item – to your new console.
7
Q: Does this offer apply to all versions of FIFA 22?
A: Yes, across both the FIFA 22 Standard Edition and FIFA 22 Ultimate Edition. This offer is not available on FIFA 22 Legacy Edition for the Nintendo Switch.
8
Q: Will I receive a loan version?
A: No. The Next Generation Player Item is an untradeable item and can be kept and used throughout FIFA Ultimate Team for the duration of FIFA 22.
9
Q: Will their rating and stats go up?
A: No, they are not dynamic items. The Next Generation item ratings correspond to each player’s ability at the time of their decisive moment.
10
Q: Can I know more about these players?
A: Sure.

Kylian Mbappé
The talent of a generation. Mbappé has become one of the world’s very best footballers in what looks like a matter of seconds. By driving PSG to the Ligue 1 trophy in his first season in Paris, Mbappé established himself as a true leader in an emergent new era of football.

Eduardo Camavinga
As the youngest player to ever start for Stade Rennais at just 16, Camavinga’s career has been one that shows a maturity beyond his years. Signing for Real Madrid at 18 just wasn’t enough for Camavinga. He had to go ahead and score a goal on his debut in the Santiago Bernabéu. Born ready for the biggest stages.

Jude Bellingham
Leaving your hometown at 17 to sign for Borussia Dortmund is more than just a sign of ability. It’s a sign of maturity, self-belief and drive. These attributes, combined with his stellar talent, are what make Jude Bellingham a force to be reckoned with. Playing a key role in Dortmund’s DFB-Pokal win last season and scoring a match-saving goal against Stuttgart this year, Bellingham is getting better with each game.

Phil Foden
The Stockport …. Phil Foden. His sharp ascent has only been surprising to those outside Manchester. Mercurial, fleet-footed with a doggedness that makes him as much of a team-player as a maverick. Three Premier League titles at age 21 tells you everything you need to know. Last season was arguably the one that Foden contributed most to, with his stunning volley against Everton last year cementing the emergence of a game-changing talent.

Christian Puliscis
From Pennsylvania to the blue-tinted lights of the Shed End. Christian Pulisic was expected to shine and at 23, having lit up the Bundesliga and the Premier League, he is delivering. After 81 appearances for Borussia Dortmund, Pulisic made his arrival in the Premier League for Chelsea. A hat-trick in his debut season and some stunning performances saw Pulisic grow into a name to worry about. With a UEFA Champions League win in his second season in SW6, the sky is the limit for Christian.

Theo Hernández
In an era where full back is the new rockstar position, staking a claim doesn’t come easy. But Theo’s lung-busting runs, attacking thrust and reading of the game makes him a leading light. AC Milan is a club that has been home to some of the greatest wing backs of all time. Theo hasn’t taken the Rossoneri shirt lightly. His first ever goal for AC Milan was a stoppage time winner. Amazing performances followed and Theo won both AC Milan’s Player of The Year and a spot in Serie A’s Team Of The Year in 2019/20. Levelling up.

FIFA 22 Next Generation Items are not available on the transfer market or through SBCs and objectives. 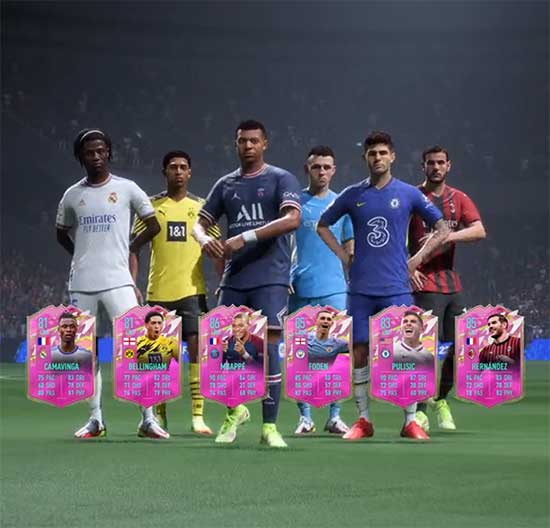