The FIFA 22 Fantasy FUT event features dynamic items which are upgraded based on the matches played, team wins, goals, assists and clean sheets.

The Fantasy FUT event was released for the first ever in FIFA 22.
Release dates for FIFA 22 are official.
All release times are indicated in the UK time zone.
FIFA 22
FIFA 22

During the event, two teams of Fantasy FUT player items are released, plus two mini-releases. 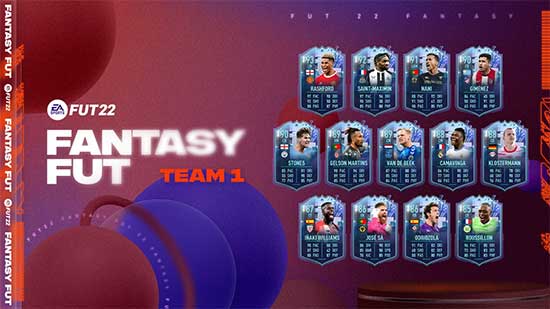 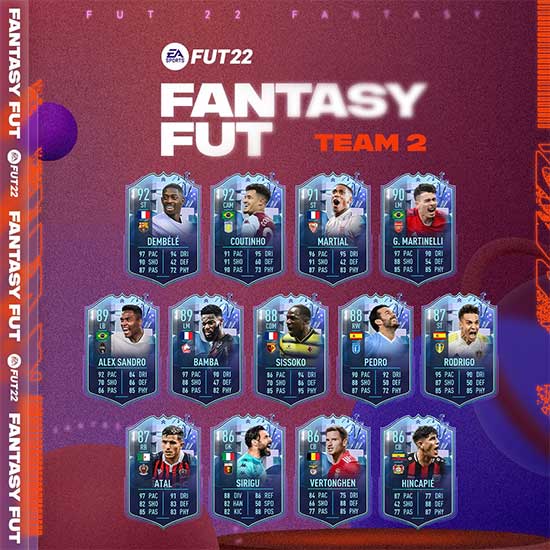 FIFA 22 Fantasy FUT FAQ section.
1
2
3
4
5
6
7
8
9
10
11
12
13
14
15
16
17
1
Q: What is the Fantasy FUT about?
A: With the football calendar reaching a fever pitch, there is no better time to release special dynamic items which are upgraded based on real-football events.
2
Q: When Fantasy FUT event was released for the first time?
A: Fantasy FUT was released for the first time ever in FIFA 22.
3
Q: What are FUT 22 Fantasy FUT dynamic player items?
A: Fantasy FUT players are boosted dynamic items that are eligible for up to +3 OVR upgrade based on real-life performances.
4
Q: How do Fantasy FUT player items receive upgrades?
A: Each player can get up to three upgrades, each one corresponding to a different achievement in their next 5 domestic league matches:
1) Play 3 matches;
2) Win 1 match;
3) Score or assist (midfielders and attacker);
Cleen Sheet (goalkeepers and defenders).
5
Q: If a Fantasy FUT player doesn’t play but their team wins one of their next five games, will they still earn that upgrade?
A: No, a scenario is fulfilled only if a player appears in the match. A player makes an appearance if they start or are substituted on in a match.
6
Q: Can Fantasy FUT players earn the position-specific upgrade without earning the other two potential upgrades?
A: Yes, each of the upgrade scenarios can be achieved independently.
7
Q: What counts as an assist?
A: Assist data is powered by Stats Perform. Assists are defined as the final touch leading to the recipient of the ball scoring a goal.
8
Q: What counts as a clean sheet?
A: A clean sheet is awarded to a defender or goalkeeper for not conceding a goal whilst on the pitch and playing at least 60 minutes. If a player is substituted off when a goal is conceded they will still fulfill the clean sheet upgrade scenario, provided that they were substituted off before the goal was scored and they played at least 60 minutes during the match.
9
Q: How many players get one of these items?
A: Around 30 players.
10
Q: When does tracking for each Fantasy FUT player item start?
A: Fantasy FUT Upgrade Tracking will start from April 1st. If a team plays on the same day as an item’s release, it will only count if the domestic league match kicks off after the item is released into the game.
11
Q: What matches count for Fantasy FUT tracking?
A: Only domestic league matches are eligible for Fantasy FUT upgrade qualification. As mentioned, the first domestic league match tracked has to kick off after the item is released.
12
Q: How long will a FUT 22 Fantasy FUT player item take to get updated in-game?
A: After a Fantasy FUT player fulfills their upgrade requirement scenario, the earliest the corresponding player item will be updated is on the following Wednesday.
13
Q: Will Fantasy FUT player items receive any additional individual performance-based upgrades?
A: No. Fantasy FUT player items will only receive upgrades based on the criteria outlined above. Team of the Week, Man of the Match, and other individual performance-based special items will have no impact on these player items.
14
Q: What happens if a player transfers or is no longer on the roster of a club?
A: If a player is no longer on the roster of the club their item is released for, they will no longer be eligible to receive any future additional upgrades.
15
Q: Can I own the regular and the FUT Fantasy item of the same player in my club?
A: You can have different items versions of the same player in your club. However, you can only play with one at a time.
16
Q: I already own this player. Why my version wasn’t upgraded to the new FUT Fantasy item?
A: If you own another version of a Fantasy FUT player, your card will keep unchanged. If you want the new version, you will need to buy it in the market or find it in the FUT store while the campaign is active.
17
Q: Are these items available in FUT packs or in the transfer market?
A: Yes. Most of them can be found in packs and can be sold in the transfer market. However, a selection of untradeable Fantasy FUT items can only be earned via squad building challenges or objectives.