This page helps you to build your FIFA 22 La Liga squad. 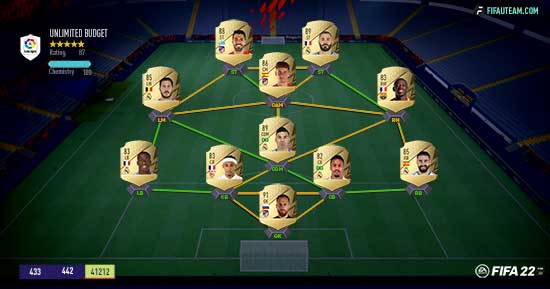 On the goal, Oblak is our favourite. No other goalkeeper is as good as he is with his hands. Éder Militão and Koundé are both very fast and defend well. If you need someone able to start the attack, Alaba is who you are searching for. Both fullbacks, Carvajal and Ferland Mendy, are fast and give enough support to the attack and to the defence.

In the midfield, Casemiro is perfect to close the ways to his goal. Ahead of him, Marcos Llorente helps the attack playing as CAM. However, this is not the position where you will see him play at his best. He defends better than it is supposed. If you are not comfortable seeing him there, you can change the formation or replace him with someone more focused on the attack, like Frenkie de Jong.

Dembélé and Hazard support the two strikers, Luis Suárez and Benzema. They are responsible to score and with their quality they will score loads of goals for sure. If you need more pace on the attack, you can replace Suárez with Depay but be warned that the Uruguayn striker scores almost double the goals. 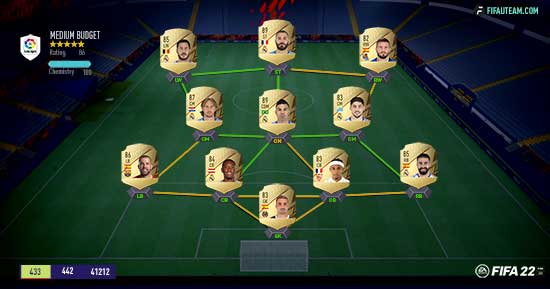 On the back, Asenjo will keep your goal safe. It is possible to build a decent defense without paying a fortune. Carvajal, Kounde, Alaba and Alba are affordable players who will give security to the back line.

One of the good news is that you can keep Casemiro in you team. In previsou years he was too expensive to a medium budget squad. He has the muscle that every centre midfield needs and he is also good to start the attacks. Valverde and Modric complete the midfield. On the wings, Portu and Eden Hazard are responsible to support Benzema.

This squad was built with players which price was under 20k coins on the release date. However, if you still have some room in your budget, Éder Militão and Ter Stegen would improve this squad a lot. 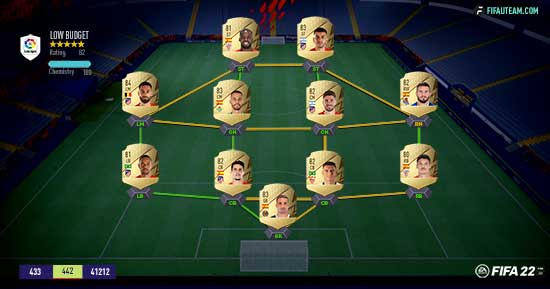 Once again Asenjo is our choice for the goal. Capa, Diego Carlos, Hermoso and Lodi complete the defence.

In the midfield, Rodrigo De Paul and Canales complement each other well. Both are good players but while the first gives security to the back line, the second is a player that usually pushes forward to assist his colleagues. Portu on the right and Carrasco on the left fill the wings in order to assist Correa and Williams, two strikes who truly give quality to this team.

There is room for improvements but you will need to save some coins. This squad was built with players which price was under 1.5k coins on the release date. However, if you still have some room in your budget Alaba would improve this squad a lot.

For all those players who plan to build a FIFA 22 La Liga squad, we’ve conducted an extensive analysis on the best players and suggested squads for different budgets.
Guidelines
Disclaimer Notes
More Guides
Guidelines
Building a team is the biggest challenge in FIFA 22 Ultimate Team. It doesn’t need to be the best team, since the budget may not allow it, but it needs to be a team designed for your style and needs.

Only Normal Players
Upgraded or transferred items are not taken into account in this guide. Only players who have started their season in La Liga Santander and with their original attributes were considered.
More Guides
Don’t forget that we have published separate guides for each position…

In Spain, the qualification for the champion is made through the points system. Whichever team gathers the most points wins the league. The first four classified gain access to the Champions League in the following year and the last three trade places with the first two promoted from the Segunda División and with the play-off winner. Every season starts in August and finishes in May, having 38 game weeks with 10 matches each, being a total of 380 matches per season.

The LaLiga is the third most-watched football league in the world and the second best league classified in the UEFA league coefficients.

Started in 1928, LaLiga has only been conquered by nine clubs. The dominant clubs are Real Madrid and Barcelona, with a total of 34 and 26 titles. Atlético de Madrid (11), Atlético de Bilbao (8), Valência (6) and Real Sociedad (2) were the other teams that have won the league more than once, while Deportivo la Coruna, Real Bétis and Sevilla only won the title once.