This page helps you to build your FIFA 22 Ligue 1 squad. 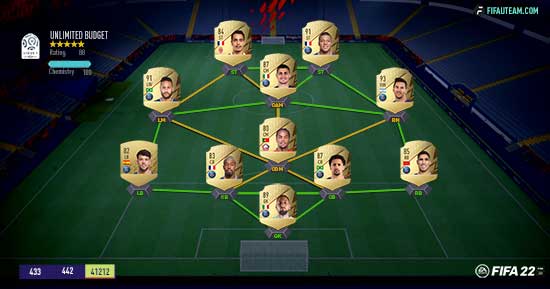 In the goal, Donnarumma is our favourite. He is the tallest and has the best reflexes and diving stats, two of the three most important attributes in a keeper.

In our opinion, Marquinhos and Kimpembe are the best centre-backs of this league. The first one has amazing defensive skills and is also good with the ball on his feet, while the french defender is stronger. Hakimi and Bernat are the right choices for fullbacks.

Messi and Neymar Jr are the obvious choices for the wings but in the centre, things are more complicated. Verratti is the best centre midfielder but, since we are using a formation with one CAM and one CDM, you may feel more comfortable playing with Renato Sanches in the back. Another options is to use Verratti as CDM, leaving the CAM position to a striker. Mbappé is guaranteed in the attack and should have Yedder next to him. 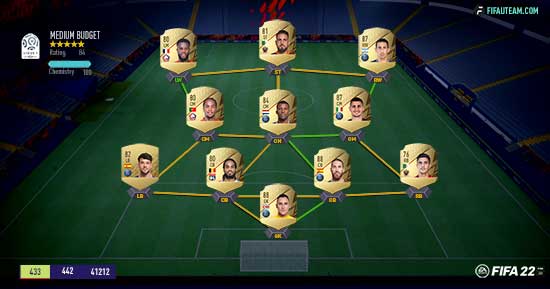 Navas, Atal, Sergio Ramos and Denayer are decent replacements in the defence. Wijnaldum brings even more quality for this strong midfield. Di María and Bamba, the weakest player of this team, play on the wings from where they try to assist Delort. Eventually, Yedder may be a decent addition if you have spare coins. 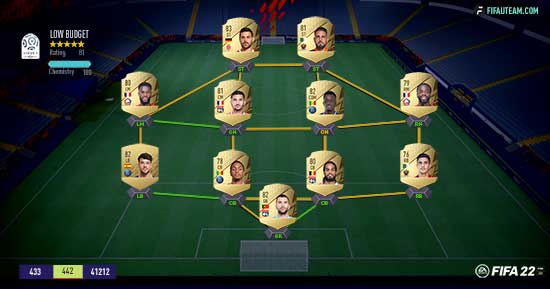 Anthony Lopes is our choice for the goal. He is one of the most solid players of this team. Atal, Denayer, Diallo and Bernat complete the defence. They are the same five exact players we have picked last year.

On the midfield, Gueye and Aouar complement each other well. Ikoné on the right and Bamba on the left fill the wings in order to assist Delort and Volland.

This squad was built with players which price was under 1.5k coins on the release date. However, if you still have some room in your budget, Gelson Martins and Wijnaldum are players that would improve this squad a lot.

For all those players who plan to build a FIFA 22 Ligue 1 squad, we’ve conducted an extensive analysis on the best players and suggested squads for different budgets.
Guidelines
Disclaimer Notes
More Guides
Guidelines
Building a team is the biggest challenge in FIFA 22 Ultimate Team. It doesn’t need to be the best team, since the budget may not allow it, but it needs to be a team designed for your style and needs.

Only Normal Players
Upgraded or transferred items are not taken into account in this guide. Only players who have started their season in Ligue 1 and with their original attributes were considered.
More Guides
Don’t forget that we have published separate guides for each position…

Ligue 1 is the sixth-best league classified in the UEFA league coefficient. It became more popular in the last years because of the high investments made by Paris Saint-Germain, including Messi signing.

The qualification of the champion is made through the points system. Whichever team gathers the most points, wins the league. Every season starts in August and finishes in May, having 38 game weeks with ten matches each, being a total of 380 matches per season.