This page helps you to build your FIFA 22 Serie A squad. 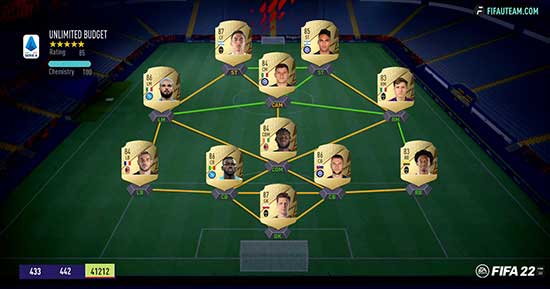 Szczęsny is our first choice to the goal and it is easy to understand why. He has the best diving, handling and reflexes attributes, the three most important stats, and only one goalkeeper is taller than him.

In our opinion, Škriniar and Koulibaly are clearly the best centre-backs in this league. Unfortunately, and as you know from previous years, Serie A doesn’t have quality right-backs. The best one is Cuadrado. If you feel uncomfortable with his defending and physicality stats, you should try another formation or a player from another league. In the other side, things are much better. Theo Hernández, supported by his amazing pace, is the best one.

Franck Yannick Kessié has no competition for the CDM position. He is the fastest but also the one with highest dribbling, defending and physicality stats. Chiesa and Insigne are obvious choices to the right and left side of the midfield.

In the attack, you can use different combinations of players. We picked Barella, Lautaro and Dybala because we didn’t want to adapat players to other positions, but you probably will have more success with the triangle Dybala as CAM and Lautaro/Immobile as STs. 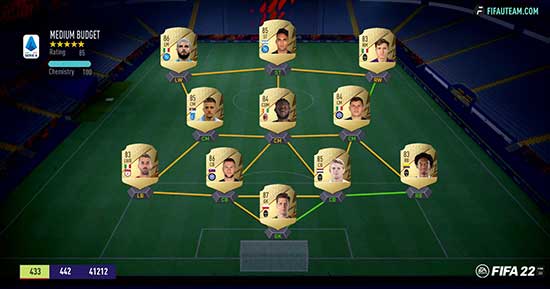 On the defence, Szczęsny, Škriniar and Cuadrado are cheap enough to remain on our squad. De Ligt and Spinazzola are the best ones to be used as replacements of Koulibaly and Theo Hernández.

For the centre of the midfield, we have chosen Kessié. He’s strong, defends well and is also a good player to start the attacks. Just like the Milan player, Sergej Milinković-Savić have both good defensive skills but is also strong on the attack giving more freedom to Barella. Chiesa on the right and Insigne on the left try to assist Lautaro, a striker that will score a lot of goals.

This squad was built with players which price was under 20k coins on the release date. However, if you still have some room in your budget, Koulibaly would improve this squad a lot. 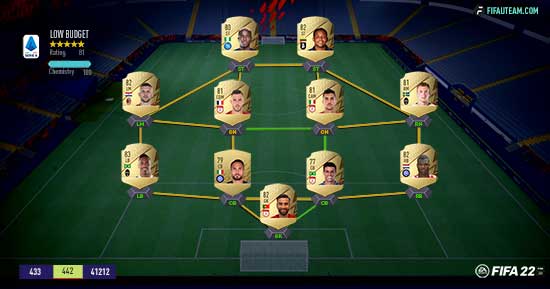 Rui Patrício is our choice for the goal. It won’t be because of him that you will lose. Dumfries, Ibañez, D’Ambrosio and Alex Sandro complete the defence.

In the midfield, Veretout and Pellegrini complement each other well. The first gives security to the backline, while the other usually pushes forward to assist his teammates. Kulusevki on the right and Rebić on the left fill the wings in order to assist Muriel and Osimhen.

There is room for improvements but you will need to save some coins. This squad was built with players which price was under 1.5k coins on the release date. If you still have some room in your budget, Lautaro and Milinkovic-Savic are players that would improve this squad a lot. If you think that you only need one CM with good defensive skills, we strongly suggest to replace the other one by Mkhitaryan.

For all those players who plan to build a FIFA 22 Serie A squad, we’ve conducted an extensive analysis on the best players and suggested squads for different budgets.
Guidelines
Disclaimer Notes
More Guides
Guidelines
Building a team is the biggest challenge in FIFA 22 Ultimate Team. It doesn’t need to be the best team, since the budget may not allow it, but it needs to be a team designed for your style and needs.

Only Normal Players
Upgraded or transferred items are not taken into account in this guide. Only players who have started their season in Serie A and with their original attributes were considered.
More Guides
Don’t forget that we have published separate guides for each position…

Serie A is one of the most competitive leagues in the world, but football is not as spectacular as it is in the UK, Spain or Germany.

The qualification of the champion is made through the points system. Whichever team gathers the most points, wins the league. The first three classified teams gain access to the champions league of the next year, and the last three trade places with the first three qualified from the Serie B. Every season starts in September and finishes in May, having 38 game weeks with ten matches each, being a total of 380 matches per season.

The Serie A is the third-best league classified in the UEFA league coefficient.

Started in 1898, the Italian league has been conquered by sixteen clubs. The dominant club is Juventus, with a total of 36 titles. Inter (19), AC Milan (18), and Genova (9) are the other teams that have won numerous titles.