The FUT 21 player items are the most important ones. In this page, we explain what information you can see in these cards.

Introduction to the FUT 21 player items

As you may imagine, FUT 21 player items are the most important ones. If your club has that type of items, it means that you can control those players on the pitch. Before any game, you will need to fill the starting eleven slots but also the seven slots for substitutes. Without that, you cannot play.

If you want a specific player, our suggestion is that you go and search for him on the market using the player filters. This way you will only spend coins on cards you don’t have and you will be equipping your club according to what it needs. Obviously, the items you get from packs should also be taken into account. However, if you think they are not necessary, put them on the market and get a few coins from them or use them to submit SBCs.

Every time you get a player card in a pack or you buy one in the FUT transfer market, you need to send it to your team if you want to use it. In order to do that, you just need to select ‘send to the active squad‘. If you cannot find the card in your squad, and if you are sure that you haven’t discard it or send it to the transfer list or transfer market, then it is because probably your squad was full and you have sent it to the club. In that case, look for it in ‘My Club’ and swap it for another player.

We will explain now what you can find on FUT 21 player items. It has a lot of information that you must pay attention to improve your chances of victory.

If you want to know how good a player is, you should look to his attributes. The six main ones (pace, shooting, passing, dribbling, defence and physical) give you the idea of how they play. But it is not enough. If you want to know exactly what you could expect from them, you should look to all their attributes and not the main six. In this case there is the exception of goalkeepers who have on their cards all the stats that determine their performances.

Each attribute ranges between 1 and 99 (99 correspond to the perfection). Such information is written on the all FUT 21 player items. Depending on your play style, your formation and the attributes of the others players in the squad, it may be a good option to choose players that are better in some specific attributes. For example, a team that often uses crossing for heading should have a striker with good heading (included in physical). Since FIFA 21, weak foot and the skill rating are also on the player item.

Weak Foot and Skill Rating details are now also included in ‘skill and health’ view of any player item. 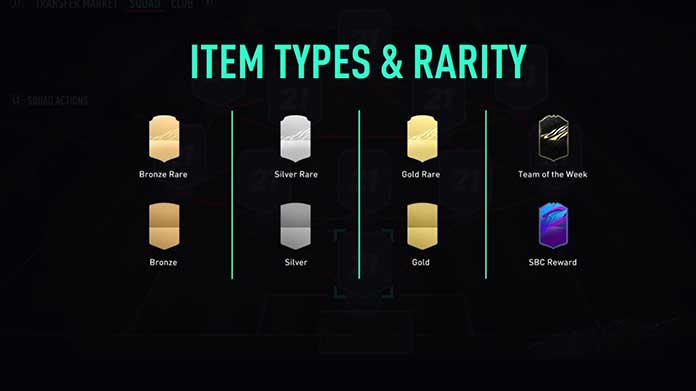 A crucial information, when you are planning your squad, is the preferred position of the players. You can choose to place the goalkeeper as a striker but, as you may expect, the performance will be very poor. You should try to respect the player card detail about his preferred position. Otherwise, you will be damaging his individual chemistry and the chemistry of the team.

Items of the same player may have different positions. If you have a card whose position does not fit into the formation of your team, you may have to make one of the following:

Trade the card on the market by another identical but with the correct position;

Lose a few points of squad chemistry and keep the player adapted to the new position;

Buy and use position change items that modify the position showed on the player’s card.

During the matches, players can get injured and being out of the following matches. On the players’ cards you can find the details about how many time the player will be out. Applying him a healing item, will speed up his recovery up to five matches. 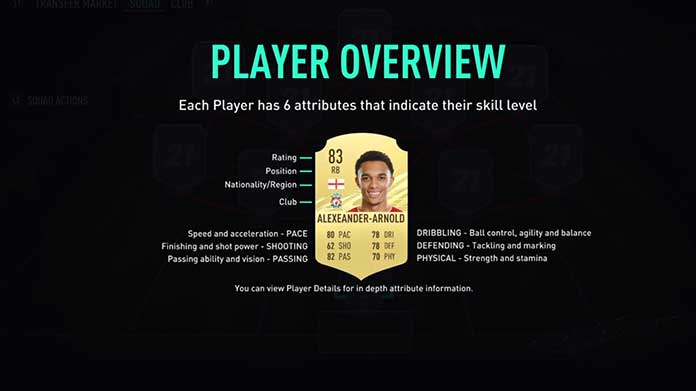 Every match that a player plays is a contract that he spends. The only way to prevent a player from running out of contracts and being unable to play, apart from not using him, is buying a conract item. That is why it is recommended that you save some coins in order to being able to buy contracts and keep your players available.

The contract item is the only consumable that you really have to buy in order to play. That’s why it is so important.

The number of contracts is also expressed on the player’s card as a number between 0 and 99. 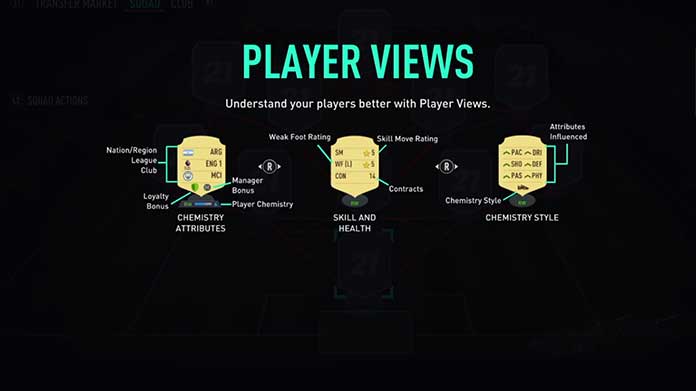 When a player is released in a card, his chemistry style is basic (BAS), the starter style. It means that all his attributes are improved in the same way (one point if chemistry is the higher possible). If you want to adjust the players attributes to your squad needs, you can apply a chemistry style item. In the active squad menu, you have a visual indicator (little green arrow) next to the stats of each player showing which ones will be affected by the chemistry and how much will be the potential chemistry boost.

The Chemistry Styles allow you to let choose what stats are changed but not how much it will change. It depends of your chemistry. If you get individual chemistry 10, you will get the higher improvement possible in the stats you chosen. 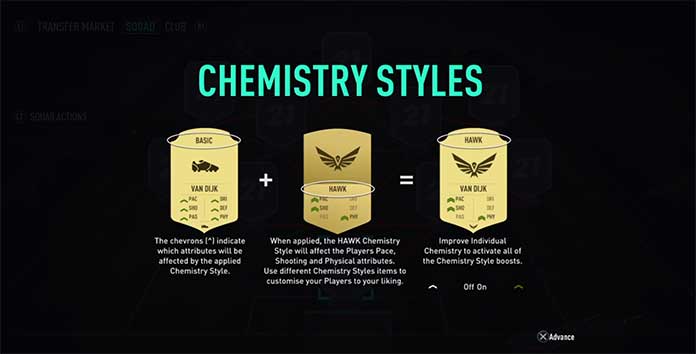 Expressed on the player item as a number between 0 and 10, the chemistry evaluates how well he identifies himself with his team mates, the manager and the team. It is a factor that helps the game play by interacting with the familiarity of the players with the positioning, the relation with the other players and the manager.

When you buy a player to your squad, you should check if he will get a good chemistry. We recommend to get, at least, individual chemistry 8. However, is specific cases, better players with lower chemistries may be a good option. 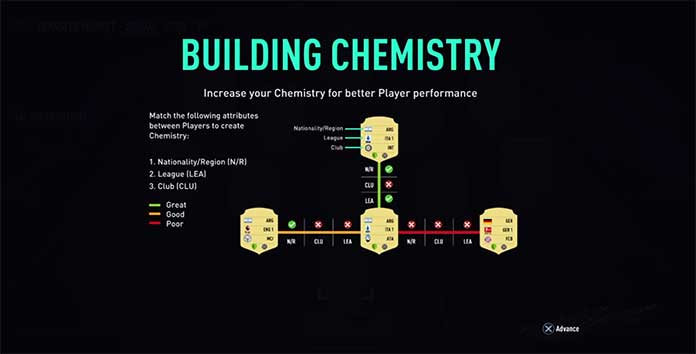 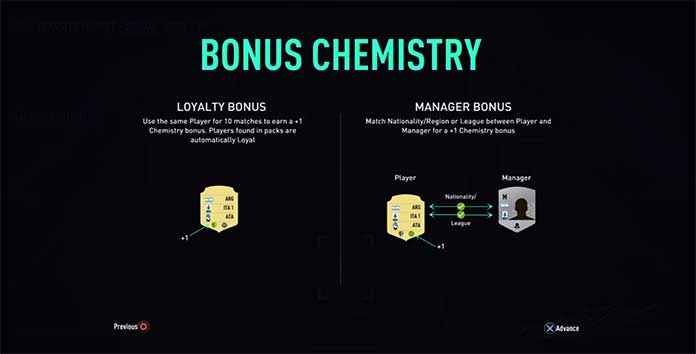 A player item gives you even more details. You can check the biographical details about the player, his statistics and the item details.

On the FUT 21 player items, you can also see all attributes, including traits, and some statistics about performance of those players. In particular, you can check how many matches he played, how many goals he scored, how many assists he made and how many yellow and red cards were shown to him.

Sometimes you find a player item that has something different on it. If you don’t know what is it, we will try to help you to identify four different situations.

When a player or a manager is out of contracts, their cards have a red folder sign on the top right side. It is very useful, especially when you are searching players or managers on the transfer market. As soon as you apply a contract item, the sign disappears.

➡️ Buy Players
Go to the transfer market, use the filters and buy.

➡️ Send a Player to the squad
After you have bought him, choose ‘send to club‘ or ‘place in active squad‘.

➡️ Use a Player running out of contracts
Choose the player, select ‘Apply Consumable’ and apply him the contract item.

➡️ Use a Suspended Player
Put him in the reserves (on the right of substitutes) and wait until the suspension expires.

➡️ Use an Injured Player
Put him in the reserves (on the right of substitutes) and wait until he recovers
OR select the player, choose ‘apply consumable’ and apply him the healing item.

Q: Where can I find all the attributes of my players?
A: You can see the attribute details directly in your console or PC.

Q: Getting a high/high work rate is a good thing?
A: Usually not. It means that your players will be often out of position. They want to attack but they also want to defend. It depends on your formation, play style and the player position.

Q: I don’t use skills. Do I need players with high star skills?
A: No. If you don’t perform skills, it doesn’t matter the star skills of your players. However, our advice is that you should learn, at least, one skill movement. It doesn’t need to be a 5-star skill movement.