It was released a FIFA Ultimate Team player card which exceeded all limits: Lionel Messi with an overall rating of 99 (!!!).

Cristiano Ronaldo is a great player, but Lionel Messi exceeds all  the limits. It is so on the pitch and it is so in FIFA Ultimate Team. Among his prize list, there are titles such as U-20 World Cup or the Olympics gold medal by Argentina, or world, European and Spanish titles by his clubs.

Collectively this season was not the best for Messi. Individually, he added a few more achievements to the various that he already reached. The more than 70 goals scored and nearly 30 assists in a single season justified the release of this so special card.

Mesi 99 will probably be in history as the most valuable card ever released on FIFA Ultimate Team. But for Messi, the special cards are already something that he is used. This is the seventh (!!!), only in FIFA12 Ultimate Team. The first to be released was the regular card at the beginning of the season. The overall rating of 94 of that card, already gave him the title of best player of the whole game. He was also in two teams of the week (TOTW) and was named twice Man of the Match (MOTM). In these four cards, ratings ranged between 95 and 97. In January, he reached 98 of rating with the Team of the Year (TOTY). At the end of the season he reached again a TOTY Card 98, this time with regard to Spanish League. Finally, in June , was released the super card Messi 99.

[imageright]https://www.fifauteam.com/pt/wp-content/uploads/2012/06/A014-1-e1338895408822.jpg[/imageright] Messi 99 is a very limited edition card: its entry into circulation is made ​​only through package purchased between June 1 and June 3, 2012. In addition to being a very rare card, it is also the one with the best attributes. It is therefore natural to reach the highest market values ​​ever achieved. It is estimated that these cards Messi 99 can be exchanged for more than 5 million coins. Of the six basic attributes, four reach the maximum possible: 99. This means that no card can have a better shot, pass, speed or dribble that this Messi 99 card. Just like on the card In Form (IF) of TOTY Spanish League, the heading remains in 70 and defensive work in 50. This release was also marked by a new color card.

Messi 99 – The Card with Solidary Goals

[pullright]”My foundation’s passion is helping children at risk around the word and bringing opportunity to those who need it most. EA SPORTS shares this passion.” Lionel Messi[/pullright]This Messi 99 card has solidary goals. Its release is associated with Leo Messi Foundation, marked by EA Sports  with a $250,000 donation. This association supports social, educational and health care related initiatives for children around the world. Learn more about the Leo Messi Foundation and help to support good causes. 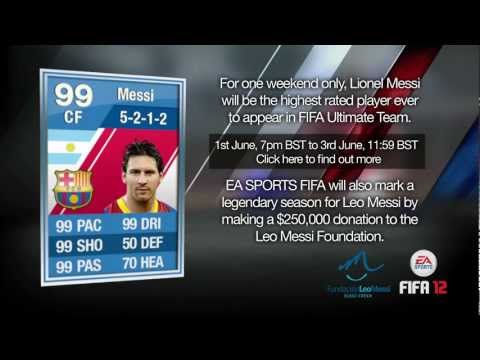 2 thoughts on “Messi 99: The Super Card of FIFA Ultimate Team”