For the third year in row, we will open the doors of our club to the community. Find out the most common problems that you will face in your club, tips, advices, analyses and everything you need to be rich in this game.

Unfortunately I don’t have many free time to play. The Web App replacement by Price Ranges made the things even harder. I didn’t play for weeks. Many weeks. Now, with the TOTS thing, I decided to give a try and I spent 1.5 million coins to build a new team. I will show it now.

Do you remember my first squad ? You can take a look to it in the previous episode. It was based in Serie A and Ligue 1. I loved to play with that squad but I never get used with my main striker: Zlatan Ibrahimovic was too slow to my play style. This time I wanted something different and for that reason I picked players of the three major leagues: BPL, BBVA and Bundesliga.

1.5 million coins may be a good budget for who plays in other platforms, but for Playstation gamers it is not. It is not even enough to the Ronaldo’s left leg. I decided to follow my own advice and avoid IF cards, which was crucial to fulfill the budget. Another prerequisite was to keep the same formation, 352, since I don’t have free time to get used to a new one.

In a few minutes I made a shortlist of the players I wanted for my team. A few minutes more were enough to buy them all, with the desired chemistry style and position, 99 contracts and for the lower price fixed by the EA Sports. After all, it was TOTS time. Here it is my selection:

In the goal I have the best goalkeeper money can buy. The defenders are the weakest players of this squad, but all the three are very fast, something really important to me. In the front of them, I picked two strong defensive midfielders. In the wings, I need top players with good pace, dribbling and passing stats. Bale and Hazard are perfect to that job. Suárez and Aguero are great strikers but sometimes I wish to have two players more different from each other playing in these positions. Supporting them I have Di Maria, my number one choice to play as CAM.

A Serbian BBVA manager gives a hand to keep the chemistry high. Excepting Matic, Suárez and Sérgio Ramos, with IC 8, and Yaya, with IC 7, all the other players have maximum chemistry. It is not important to know who I picked to the bench because consumables are really cheap and I use fitness and healing cards to keep all player available all the time.

This squad was built for me but it may be useful to you too. In a short time, it will be possible to buy it with ‘only’ a million coins. I don’t think it is possible to make a better squad with this budget. If you try it, give us feedback please.

MY FUT 15 was supposed to be published more often but EA did not allowed me. Basically, I can’t access the game in the console or in the Web App.
They promised to fix my corrupted account but it will only happen maybe in FIFA 16. Or never. I lost my top-squad and had to begin a new one from the scratch. I was many time without playing and for that reason MY FUT 15 was not published.

What better time to be back to the game than during FUTMas ? Just need to buy during the best Happy Hours for a slightly lower price than the minimum BIN and sell it in the day after. Anyone can do it. In less than two days, I made the 190k coins I needed to build a good team, with subs and reserves included. The results have been so good that I could not waste the chance to share it with you. For this price (and in the next Happy Hours prices will be even lower), it shouldn’t be possible to build a much better squad.

The 352 formation was new for me, and it required some practice, but for who defends well, like me, it puts more players spread across the field. Sirigu, Thiago Silva and David Luiz should be used in any hybrid squad. Chiellini is also a top-quality defender and, like the other ones, he is very fast, something especially important for 3xx formations squads. To the midfield I picked strong players with high stamina: Matuidi, Vidal and Pogba fill that area of the pitch. Any of the three would cost much more if they played in Barclays Premier League. In the wings, Lavezzi and Cuadrado are fast enough to assist to Tévez and Ibarbo, two players who frighten many opponents. This hybrid of Ligue 1 and Serie A players with full chemistry is a top-squad that costs as much as a single good player from BPL or Liga BBVA.

Let’s see who are and how much I paid for these players:

I also bought players to the bench and to the reserves:

If you have no idea about what affordable squad you should build, you can try this one and then give me feedback.

Don’t forget to redeem your free Premium Gold Pack. It is available only today for all FUT 15 players.
Happy Holidays for everyone !

Find out, how I got a TOTW Neymar in one of the first packs. Or maybe not. How curious you are ? 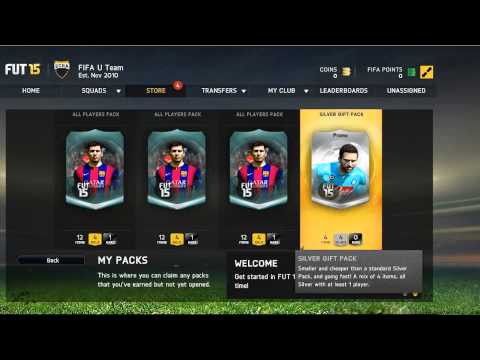