This page helps you to build your FIFA 22 Bundesliga squad. 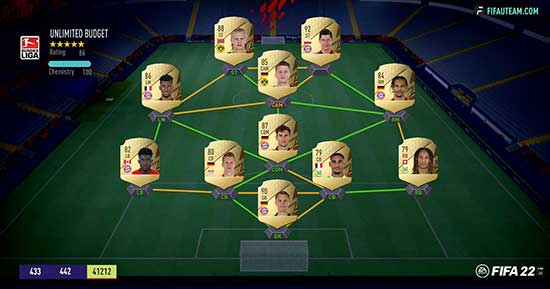 If there are undoubted players in this team, Neuer is certainly one of them. He is clearly the best. He has the highest values in all six face stats.

Lacroix and Klostermann are two fast centre-backs that will help to keep your goal safe. We know that you may disagree with us because Upamecano has great stats. We agree with you in that. However, he also has terrible work rates that may ruin your chances to keep a clean sheet. In our opinion, the other spots of the defence should be filled with Kevin Mbabu and Alphonso Davies. However, if you feel uncomfortable with the defence skills of Mbabu, you should try Mukiele or a player from another league (an Icon would be great!).

There are at least three midfielders on Bundesliga good enough to play on this squad. Since we are using a formation with one CDM and one CAM, one of them will have to go to the bench. In our opinion, playing with Goretzka as CDM and Reus as CAM is the best decision. However, you may prefer to use Kmmich as CDM and Goretzka as CAM (you can even use him as a striker if you don’t have enough coins for our first two suggestions). Coman and Sané are easy choices for the wings.

On the attack, Lewandowski and Håland are much much much better than any other striker. 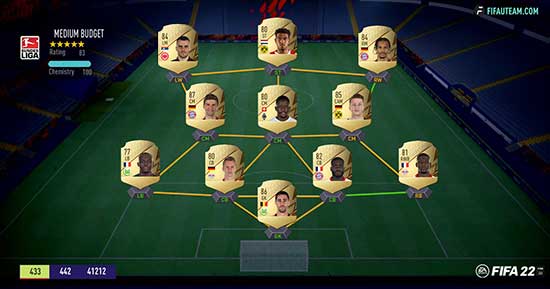 On the back, Casteels will keep your goal safe. Upamecano and Klostermann are fast and solid centre backs, supported on the left side by Roussillon and on the right side by Mukiele.

Zakaria is perfect to play in the centre. He has the muscle that every midfield needs and he is also good to start the attacks. Reus and Muller complete the midfield. On the wings, Sané and Kostic are responsible to support the striker.

We picked Malen for the most advanced position since he is the third-best striker from Bundesliga and the first two are too expensive to a medium-budget squad. However, he is more suitable for a counter style. If this is not your case maybe you can try André Silva or adapt a good midfielder to this position.

This squad was built with players which price was under 20k coins on the release date. However, if you still have some room in your budget, Mbabu is a player that would improve this squad a lot.

As it happend last year, Hrádecký is our choice for the goal. It won’t be because of him that you will lose. Mukiele, Ginter, Gvardiol and Guerreiro complete the defence. If you think the Portuguese defender is too attacking, you may have to replace him by Lucas Hernández.

In the midfield, Witsel and Nkunku complement each other well. The first gives security to the backline, while the other usually pushes forward to assist his teammates. Baku on the right and Kostić on the left fill the wings in order to assist Malen and André Silva.

This squad was built with players which price was under 2k coins on the release date. There is room for improvements but you will need to save some coins. Reus and Zakaria would be interesting additions.

For all those players who plan to build a FIFA 22 Bundesliga squad, we’ve conducted an extensive analysis on the best players and suggested squads for different budgets.
Guidelines
Disclaimer Notes
More Guides
Guidelines
Building a team is the biggest challenge in FIFA 22 Ultimate Team. It doesn’t need to be the best team, since the budget may not allow it, but it needs to be a team designed for your style and needs.

Only Normal Players
Upgraded or transferred items are not taken into account in this guide. Only players who have started their season in Bundesliga and with their original attributes were considered.
More Guides
Don’t forget that we have published separate guides for each position…

Bundesliga lives in the shadow of Premier League and La Liga but the truth is that it has many quality players.

The qualification of the champion is made through the points system. Whichever team gathers the most points, wins the league. The first four classified gain access to the champions league of the next year, while the last three trade places with the first two qualified of the 2. Bundesliga and with the play-off winner. Every season starts in August and finishes in May, having 34 game weeks with nine matches each, being a total of 306 matches per season.

Bundesliga is the most-watched sports league in the world and the fourth-best league classified in the UEFA league coefficients.

Started in 1962, the Bundesliga has been conquered by twelve clubs. The dominant club is Bayern Munich, with a total of 31 titles. Borussia Dortmund (5), Borussia Mönchengladbach (5), Werder Bremen (4), Hamburger SV (3), VfB Stuttgart (3), FC Köln (2) and FC Kaiserslautern (2) were the other teams that won more than once.