This year we have decided to publish a FIFA 22 chemistry guide shorter than usual and also more accessible for everyone. Cause chemistry is extremely important in FUT 22, be sure to read until the end.

As we will see next, FIFA 22 Chemistry measures several factors that are considered enough important to affect the performance of a player.

The natural position of a player is shown on his card. The position where he’s about to play is shown on the active squad menu. The first situation (green) refers to when both positions are the same. That is the greatest situation to benefits chemistry. However, when a player is assigned to play in a strange position for himself, chemistry is strongly affected. Goalkeepers are a good example of that. They can only play well on the goal, and are the only players that can’t get adapted to any other position. In certain cases, when a player’s preferred position doesn’t match with the position he’s about to play, it’s possible to fix this using a position modifier card.

In order to know what positions a player can get adapted to, consult this table.

Relation with the other Players

The stronger these connections are, the higher will be the player’s individual chemistry. That’s why most FUT 22 teams are built based on a league or on a nationality. This way it’s possible to eliminate the dead links and guarantee high chemistry.

The chemistry of a player can also be improved in two other ways:

– Relation with the Manager
Each player who has the same nationality or league as the manager, will receive one extra individual chemistry point.
Manager bonuses are represented by icons on the player card. A green icon means the player is receiving a bonus because he has, at least, the same nationality or the same league as the manager.
When a manager’s league doesn’t match with the player’s league, it’s possible to fix this by using a league modifier card.

– Loyalty to the Club
Each player pulled from a pack or that have played at least 10 matches in a club, will receive one extra individual chemistry point.
Loyalty bonuses are represented by icons on the player card. A green icon means the player is receiving a bonus.

Chemistry styles were created to redistribute the stats that will receive chemistry boosts. These consumables allow you to choose what stats are changed but not by how much it will change. It depends on your chemistry. If you get individual chemistry 10, you will get the highest improvement possible on the stats you have chosen.

When the chemistry view of a player card is selected, it is possible to see small arrows showing which stats will be affected by the chemistry and the maximum available stat boost. These arrows can be white or green. A white arrow indicates a possible boost that isn’t being received, which will mean that player doesn’t currently have high enough Chemistry to get the maximum benefit. A green arrow indicates that the stat will be boosted. The more arrows per stat, the bigger will be the available boost. The more green arrows per stat, the bigger will be the boost. The maximum number of chevrons that can be filled is 6. 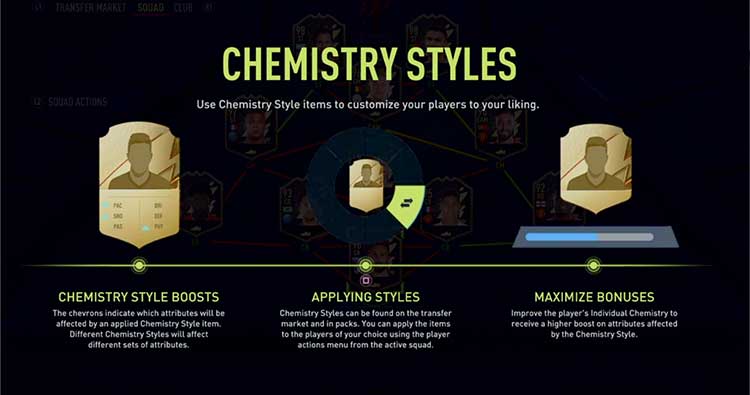 Chemistry is a long topic but we promised to publish a short guide. That’s why we will summarize a few points we believe everyone should know.

– Icons
Since Icons don’t have a league or club associated, there are slight differences on how to calculate their FIFA 22 chemistry. Basically, they link well with other Icons just like regular players link with their teammates.

– FUT Heroes
Heroes have unique league-specific chemistry which is tied to their specific hero moment, providing a green club link to any player within the same league as well as the usual nation link. See this image for more details.

– Chemistry Intensity between Two Players
The intensity of the connection between two players is merely a graphic representation. It doesn’t mean that these players, in particular, play well with each other if their connection is green. What really counts for the individual chemistry is the summation of the intensities of the connections that a specific player has. Each player’s attributes are affected and not necessarily his relation with the teammates.

– Substitutes
Every player who comes on as a substitute does it with a static individual chemistry of 5. Like any other player, his attributes are also affected by the team chemistry (25%) but he doesn’t affect this chemistry. It does not matter which player he will replace, because he will not take the chemistry of that player. He will always have individual chemistry of 5, regardless of the quality links he would create with the teammates or his position.

– Formations, Tactics and Position Changes
Once in-game, Team Management has no effect on chemistry. This means that you can change the formation and the tactics how many times you want that it will not affect the players’ attributes. Besides that, you can also freely change the position of players that this will not interfere with their performance.

– Chemistry Goal
A ‘good chemistry’ is achieved when a team has all players featuring individual chemistry of 10. When this is not possible, we recommend that at least none of them is lower than 7. The easiest way to do it is to build a team based on a single league or nationality. As long as all players are in their natural positions, their individual chemistry will be 9 (before the manager or loyalty bonus).