ROAD TO THE KNOCKOUTS Road to the Knockouts


The RTTK promo is the of the FUT cycle. It goes out one week after Ones to Watch and celebrates with dynamic items, objectives and SBCs the group stage of UEFA Champions League, UEFA Europa League and UEFA Conference League.

These special items are released on the event launch date with a slight improvement. However, they receive in the following cases:

You can check our tracker to follow the progress of Road to the Knockouts cards.


The FIFA 23 Road to the Knockouts event features several offers, including special items in packs, SBCs and objectives. To know which promo packs are available, go to our dedicated page.


You can get a good idea about which offers will be available by looking to the past years offers. 
During the event, a team of themed players and a mini-release are released on the following dates: 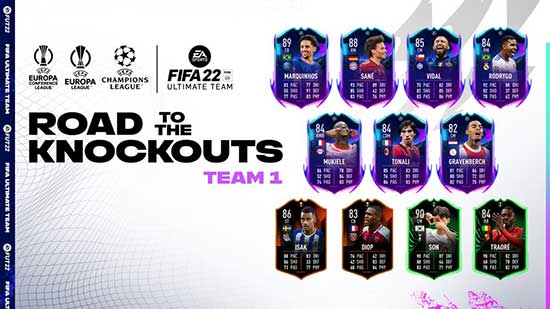 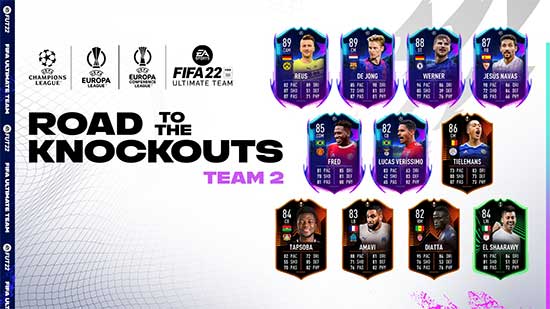 Frequently Asked Questions
What are Road to the Knockouts cards?
Road to the Knockouts, commonly abbreviated to RTTK, is a Special item category assigned to a very limited selection of players, replacing their regular cards at specific times. These cards celebrate the UEFA Champions League, UEFA Europa League, and UEFA Conference League Group Stage and can receive upgrades.
What are the ratings of RTTK items?
FIFA 23 RTTK items are released with a slight boost on rating and stats. They can be upgraded later if they meet specific conditions.
How does RTTK items get upgraded?
In addition to an initial upgrade, players also have the potential to earn two additional upgrades during the Group Stages of UEFA club competitions:

Road to the Knockouts items will be updated on the Friday night after the matches.
Does a player need to play to earn upgrades?
No, Road to the Knockouts players do not need to have played for their team to receive any upgrade that they are eligible for.
What happens if a player transfers?
If a player is no longer registered for the club they represent at the start of the Road to the Knockouts campaign they will not be eligible for additional upgrades.
What happens if a player’s club is knocked out?
If a player’s club is knocked out of any of the tournaments they will not be eligible for the qualification upgrade. This includes players who qualify for the UEFA Europa league by finishing third in their UEFA Champions League group.
What if a match is postponed?
Road to the Knockout items only need two wins in order to receive a ‘wins upgrade’. If a team has had a game postponed and as a result has four remaining games from October 7th, they will still only need to win two out their four remaining games to receive a ‘wins upgrade’.
Will there be additional upgrades?
Road to the Knockouts players are only eligible for upgrades during the Group Stages, however RTTK is just the start of our celebrations of the UEFA competitions with more to come in the Knockout Stages of the UEFA Champions League, UEFA Europa League, and UEFA Europa Conference League.
How can I get one of these cards?
You can get a Road to the Knockout item in the same way as any other card: in packs or on the transfer market. If you want to try your luck on packs, you can go to the store and buy them with coins or FIFA Points. They can be found in any pack with players’ cards, including free packs. Finding one of these cards is higher if you open a pack containing more player cards.

Completing specific SBCs and objectives may also reward you with an RTTK item.